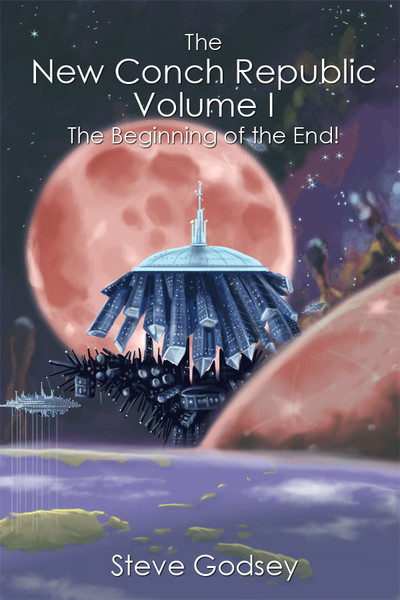 The New Conch Republic Volume I The Beginning of the End!
by Steve Godsey

The New Conch Republic by Steve Godsey is a tale of turmoil, which began with World War II, and continued for centuries as the world evolved and expanded into deep space. Now it is not only humans, but aliens alike, who engage in this struggle to survive.

This story takes place in deep space, but is being chronicled by a group secretly known as 'Time Walkers,' ones who travel through time to any place or time in the galaxy, appearing human in form. They are rumored to have first appeared on Earth to stop an alien assassination plot to kill Adolf Hitler before his rise to power.

While the timeline moves all the way to A.D. 3304 in deep space, so much action takes over the centuries, as the story recounts many historic events that played out here on Earth. However, now, a corrupt and greedy Shadow Government has taken over everything. Will the various human and alien empires come together to overthrow this evil, or will the battle rage on until only the strongest survive?

Steve Godsey is a native of Ohio and currently resides in Cincinnati. His interests include travel and sightseeing, as well as reading historical books and watching DVDs.

The author's purpose in writing this novel was to encourage present and future generations to take an interest in our planet and its problems before it is too late. It is also his hope that space exploration will continue so that we might know if we are in this galaxy alone, or are there others out there?