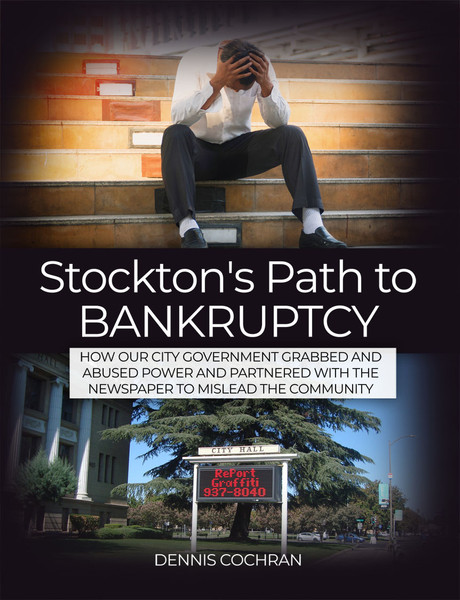 Stockton, California, grew out of the Gold Rush of 1849. It became a thriving city through agriculture and manufacturing. It boasts excellent schools and colleges and has a world-renowned symphony and art museum. But, in July 2012, it was the largest American city to file for bankruptcy and currently is # 8 on Forbes Most Dangerous Cities in America. Stockton’s Path to Bankruptcy is an insider look at how the city fell apart.

In 1993, Stockton won enterprise zone designation from the state government to be used to revitalize the depressed city center. Dennis Cochran was one of several locals invited to submit an incentive idea. He proposed a volunteer-staffed graffiti cleanup program. Cleaning graffiti is an easy, cost-effective way to discourage crime and promote beautification. Initially encouraged by the enterprise zone, Cochran soon learned that it was corrupt and mismanaged with unclear policies, skyrocketing permit fees, and local businesses bullied until they abandoned the center entirely. Like many citizens, Cochran was on the outside of the local government – his offers of help ignored and his good advice rejected.

In just under twenty years, Stockton’s local government, protected by a local newspaper, destroyed the trust of its citizens. Cochran chronicles every bureaucratic twist and depravity – from the city losing $43,000 a day, plundering public safety funds to finance a ballpark, to stealing land from a local church. Stockton didn’t become bankrupt because of the financial bubble or housing crisis. Stockton went bankrupt because of its public officials’ abuse of power and attitude of hostility towards the community.

Exposing mistakes acts as a disinfectant – and Stockton’s Path to Bankruptcy is a powerful aid to helping heal Stockton and serves as a warning to citizens of other cities.

Dennis Cochran has worked in industrial chemicals sales and training. He developed a unique nonprofit company that helps clean up local graffiti. Passionate about his community, Cochran has served on the board of the Salvation Army, Taxpayers Association, and the Boys & Girls Club.