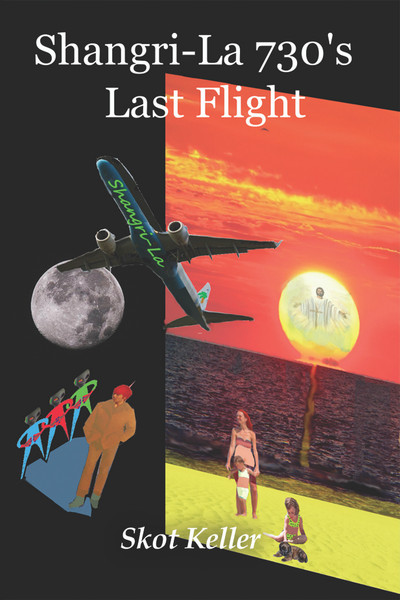 Shangri-La730’s Last Flight is inspired by Malaysia Flight 370, which went missing on March 8th, 2014; it has never been found and remains a mystery as to what happened to it. The people on the Malaysia plane are assumed to be dead, and the people on Shangri-La 730 do not come away mortally alive either. Rest assured that there is a happy ending for everyone.

When an Australian engineer has an idea that he sends out in a mass email about a theory that will lead to a scientific breakthrough, it makes an alien race called the sigla nervous, and they try to squash the idea by commandeering Shangri-La flight 730 in flight. There are humans, extraterrestrials, as well as angels all involved with what happens aboard the plane.

This is importantly a Christian piece of fiction, not factual or scripturally based. Some questions that are explored are: If there are intelligent extraterrestrials, do they have a relation with GOD like humans have a relation with GOD, and how are their spiritual beliefs related to mankind’s? Their GOD and the Christian GOD must be the same because the Creator created everything. Other questions are considered, e.g.: What is the purpose of life? What is eternal life without perfection, and what is perfection?

What happens to good people who have not accepted Jesus, Yeshua, as their Savior, Lord, and Master? Do animals have souls? Hopefully those who read Shangri-La 730’s Last Flight will come away with an uplifting feeling that there is a perfect plan working its way out in its perfection and a hopeful belief that they can be reunited with all they love in GOD.

Skot Keller lives in Washington State and iz an electronic technician by training who has worked in the television, military, and computerized machinery industries. He has retired from a major manufacturer of commercial aircraft and this is his first novel, hopefully not his last. He is blessed to have a wonderful wife and two grown children. He walks dogs every day and has since 1995. Currently he walks a German shepherd and a toy poodle dog, as well as a neighbor’s German shepherd. He is a very spiritual man who is a partner with a couple Christian ministries. He also has stories of supernatural experiences such as seeing full-body apparitions on two occasions when he was very young in his crib. He is not ashamed of Jesus and believes in his heart and confesses with his mouth that Jesus Christ is the Son of GOD who sacrificed His mortal life on the cross for all mankind’s sin in order that we may be acceptable to the Father.

Up the Creek in Eureka - eBook