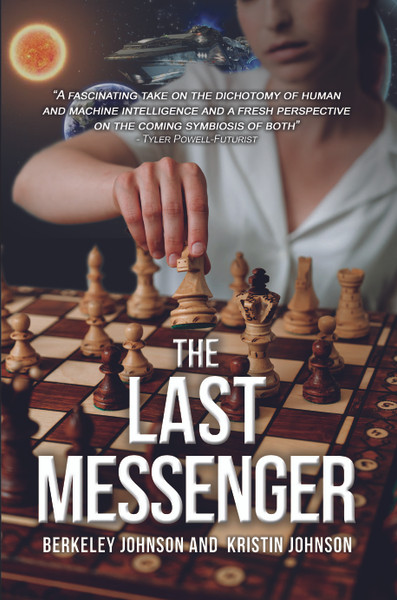 By:  Berkley Johnson and Kristen Johnson

During the Civil War era, a dying sentient machine touched down on earth and transferred its essence into the human population in preparation to defend the world against an ancient enemy sterilizing planets of all biological life. The Destroyer has learned of earth and is a generation away from arriving. A teenage chess prodigy, Maddie, her mute but superhumanly strong twin brother Sven, and her biggest chess adversary and burgeoning love interest Benton, along with a grizzled beat cop, form an unlikely group to defend the earth against a machine built to kill suns and solar systems.

Berkeley Johnson is a humorist, poet and short story writer for magazines and newspapers. A graduate of UCLA, he has raised four children in Santa Barbara, CA with his wife of 30+ years. On his own time he enjoys making infrared cameras, superconducting wire, and tequila.

Kristin Johnson is a prize-winning/prize-finalist writer, blogger, ghost-writing/creative writing consultant, screenwriter, and editor. A graduate of the former Master of Professional Writing Program from the University of Southern California, she has published/collaborated on several books and co-produced two short films. She is a member of the Desert Screenwriters Guild, an officer of the World Game-Changers, a member of the Society of Children’s Books and Illustrators, and Palm Springs Women in Film and Television.

“WONDERFUL CHARACTERS AND TECHNOLOGY. OPERATIC IN SCOPE AND SCALE WITH A COMPELLING GALACTIC FOIL. A GREAT READ!”

Dr. Karen Johnson – Pediatrician The Last Messenger is their second book collaboration. The first was the thriller, The Divinity Protocol in 2017.