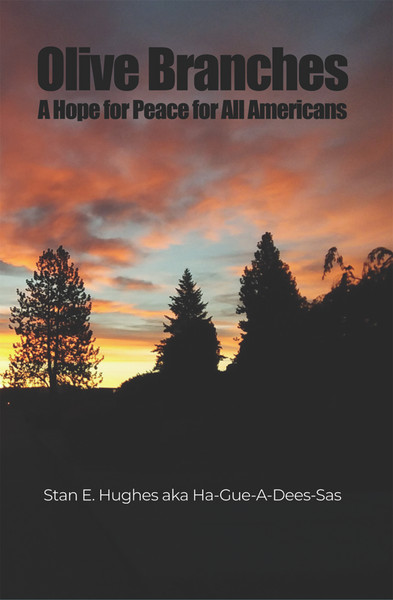 By: Stan E. Hughes aka Ha-Gue-A-Dees-Sas

Olive Branches: A Hope for Peace for All Americans seeks to provide ways for people in the United States to become a little kinder and patient towards the many disenfranchised that seek the American Dream. Rudeness and prejudice continue to permeate more deeply than ever into this beautiful country and is continually modeled by government and business leaders, making it supposedly acceptable for others to do the same. What was once considered greedy or excessive is rapidly becoming the norm and a mirror needs to be held up to show us what we are really becoming as a people. This book seeks to teach readers to “live simply so others may simply live”.

These lessons come from the author’s forty years of experience in the public school system as a teacher, administrator, and college professor. He observed how children look at the influential people in their lives as they are trying to find out what it is like to be a “grown up”. As they continue to watch the mean and thoughtless side of interpersonal relationships, will yet another generation go on to make the canyon separating our country even wider?

Stan E. Hughes a.k.a. Ha-Gue-A-Dees-Sas (Seneca for “Man Seeking His People”) is a retired public school administrator and college professor with an extensive publication background including an Editor’s Choice Award from the International Library of Poetry and the Nation Silver Arrow Award for Excellence in Native American Literature for his book Medicine Seeker. Hus publication on Chesapeake Bay history titled Children of the Blue Fish continues to be lauded by critics and readers across the country.

Hughes was very active in Native American Education issues, serving as a consultant for the Indian Education Technical Assistance Center at Gonzaga University in Spokane, Washington where he spoke and lead workshops at conventions from Alaska to Alabama. He was an officer in both the Washington State and Oregon State Indian Education Associations. His developmental years were spent in the Black Hillls of South Dakota, considered sacred by the Sioux Nation, and as an adult he participated in the Rite of Passage to warrior-hood during a seven day fast and vision quest in the Big Horn Mountains of Wyoming under the tutelage of traditional shamans from Northern California.

Hughes is a veteran who served in the United States Army from 1959 to 1965. He had four children, three girls and a boy, all of whom are very successful in their individual endeavors and all who walk gently on the Earth Mother in respect and appreciation. Also, he has six grandchildren, three boys and three girls. His granddaughter is in the Marine Corps at Camp Pendleton, California and is a sixth generation warrior – and the first female. His special person, Phyllis Betts, has been his partner for almost thirty years and is retired in the field of public education.

Many Branches of Perfect Loving

Many Branches of Perfect Loving - eBook

Olive Branches: A Hope for Peace for All Americans - eBook