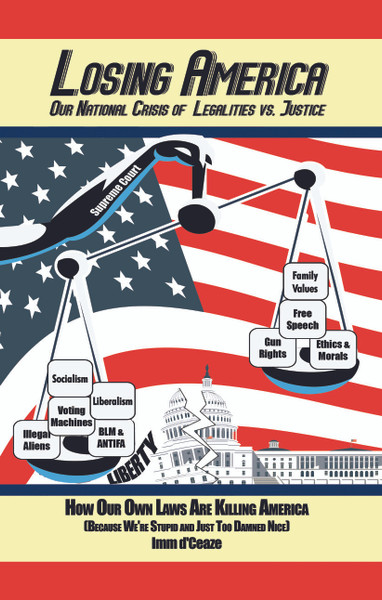 Losing America: Our National Crisis of Legalities vs. Justice How Our Own Laws Are Killing America:

Losing America: Our National Crisis of Legalities vs. Justice was written in the last half of 2020 through the first two months of 2021, when the Chinese virus pandemic was rampant and began affecting the entire world, while it destroyed our people and our economy. It includes some thoughts and realities about our past, present, and possible future political history, due to the dramatic change in our leadership from staunchly Conservative to dangerously Socialist. Burning issues written here are from the perspective of the fiercely patriotic and aging author from his personal accounts and countless news and television broadcasts that starkly indicate that this country has been sliding into a leftist Socialism for decades. Now we are at a pivotal moment in history where we need to fight back or lose our country, its prominence in history, and its light to the rest of the world. To many astute readers, some ideas here might seem raw, radical, and disturbing. So be it.

Imm d'Ceaze was born in 1942 in Wichita and raised in Kansas by hardworking blue-collar parents. As a youth he loved playing team sports, hunting, and fishing. In 1962 he joined the Navy and became a Hospital Corpsman specializing in laboratory medicine and blood banking. After being honorably discharged in 1966 off of a nuclear submarine tender harbored in Spain, he worked in Seattle as a laboratory technician while studying electronics and earned a Second Class FCC license in communication electronics. After a year working with secret clearance on a missile program at Boeing’s Kent (Washington) Space Center, he attended Shoreline Community College in Seattle, achieving the Honor Roll and President’s List before moving on to the University of Washington to eventually earn a Bachelor of Science degree with a minor in Math and a major in Geology. He then worked for two years for a consulting civil engineer in Seattle before being hired in 1975 by the U.S. Bureau of Mines (USBM) in Spokane where he worked as a mining and minerals field geologist on a Wilderness land evaluation program for about 11 years. From Spokane he and his wife moved to the USBM Headquarters office in Washington, D.C., where he served about five years as the Alaska Programs Manager, and was then promoted to the position of Deputy Chief of the Alaska Field Operations Center (AFOC) in Anchorage, Alaska, in the summer of 1991.
While waiting for his wife to work long enough to secure some vested benefits, he worked at the Blood Bank of Alaska until moving to Blaine, Washington, in 1997. In Blaine he and his wife lived on their sailboat, designed and built their retirement house, and lived in Blaine for the next twenty years. They moved to the Southwest in late 2017.

What All Women Need to Know: From Teens to Menopause - PB

Quotes Plus: A Book of Quotes & Thoughts of a Deep Thinker Plus True Short Stories - eBook

The Christmas Rescue: Paw Prints and the Magic of Love