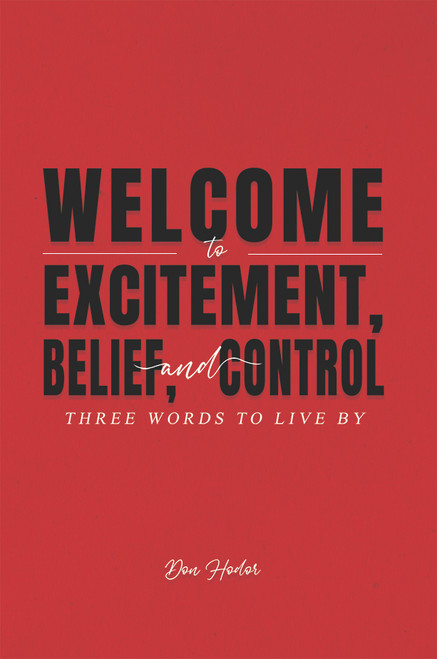 Welcome to Excitement, Belief, and Control: Three Words to Live By

What makes some people more successful? Is it their personality? Do they have a high IQ? Maybe it's their strong work ethic? Long work hours? Is it above average physical characteristics? What really sets these successful people apart as leaders rather than followers? With my engineering background as a resource coupled with the number of successful people I met over the twenty years, I set out to document all aspects of their lives and actions. You ask, “Is this another self-help book?” I, too, have read dozens of self-help books. These books recount stories and offer step-by-step procedures to success, but none really hit the target on the simple, concrete essence of their success. With an engineering background as my tool and logical approach, I got started.

I like to find the 'common denominator' when solving a problem. I don't have the time to learn the complicated steps or detailed formulas for success. Let's get to the bottom line quickly and accurately. As I stated earlier, just give me the time, not how to build a watch! The secret is in three words: Excitement, Belief, and Control. Read more to find how and why this simple formula works.

Don Hodor’s career in business started with Gimbel’s department stores in Pittsburgh, and in Philadelphia as the senior information technology director. His responsibilities included all point-of-sale cash registers, network computers, telephone systems, and surveillance systems where he reported directly to the CEO and President. After ten years, he found Southpoint Telecom Technology in 1990 and then the Southpointe chamber of commerce in 1993 with the purpose of networking between businesses and establishing a database of the companies in the Western Pennsylvania industrial park Southpointe. In 2011, he started Southpointe Quarterly Report & Directory¸ a comprehensive magazine listing businesses, articles, and points of interest in the Southpoint business community.

Don is a twenty-year board member of Washington County Council on Economic Development and the past president of the Washington County Chamber of Commerce and the 84 Chamber of Commerce. As well as the past president of the Rotary Club in Houston, PA, a member of Masonic Lodge 164, and a 32nd degree Scottish Rite member. He is the director of the twenty-fifth annual Southpointe tradeshow. He has participated on the panel discussion for Post-Gazette energy forum and appeared on TV.

He is a Federal Aviation Association certified private pilot. He has captained a 58-foot yacht, taking it from Annapolis, Maryland to Fort Lauderdale, Florida, and later to Key West and the Bahamas. Don relaxes by sailing a 34-foot C&C on the Chesapeake Bay and playing piano and guitar.

Don is married to Geri with one son and two daughters and 5 grandchildren.