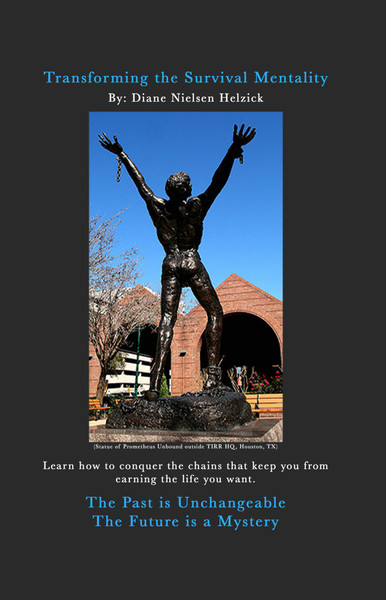 Transforming the Survival Mentality by author Diane Nielsen Helzick is a self-improvement guide to teach readers to conquer the chains that keep us from earning the life we want. After a very troubled and abusive past, Ms. Helzick realized that the lessons she has learned in her life may help others to seek happiness, no matter what. It was on an island in the Portuguese Azores that Ms. Helzick came to know that the only way to truly make successful choices in life is to live in the present reality. This was the impetus that drove her commitment to demonstrate how living in anger and fear are the primary agents of unsuccessful choices. The book itself contains many helpful passages, self-reflection exercises, and poignant dialogue by the author to provoke our innermost thoughts. It is the author’s fervent prayer that her readers are motivated to forgive the past and not be distracted by fear, so that they can enjoy living in the present.

Diane Nielsen Helzick has worked in many fields, but her most enjoyable work was at NASA on the space shuttle reconfiguration system. Her team was responsible for decreasing the launch gaps of the shuttles from 700 to 70 days. She also has advocated for abused and neglected children in her home state of Texas for over 20 years. Ms. Helzick was instrumental in the creation of a special living environment for severely handicapped young adults in Houston, Texas.

Ms. Helzick worked for an organization called CASA to help at-risk children. Two months after the death of her husband, Gerry, in 2004, one of her CASA children asked her to adopt him. She resigned her post at CASA in order to adopt him, and on November 19th, 2004, Ms. Helzick picked up her new son, Charles. Today, Charles is a fully-functioning, well-educated, autistic top cook at a luxury hotel in San Antonio. Today, he is her hero!