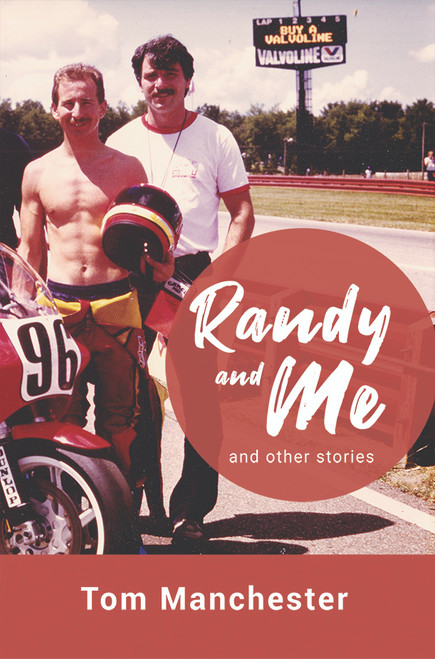 Randy and Me and other stories is a collection of stories in chronological order about Tom Manchester’s adventures with a fellow named Randy Renfrow, who was a colleague, a good friend, and an amazing guy who had an exceptional talent as a motorcycle racer, and the Yamaha RD350 from his youth, a motorcycle that led a double life as a serious race bike and as daily street transportation. The stories contained within are either funny, exciting, or poignant—and sometimes all of the above.

Tom Manchester was born in Iowa City, Iowa in 1951 while his father, Miles B. Manchester, was going to the University of Iowa on the GI Bill after having served in WW2. Upon receiving his Master’s Degree in Political Science, his father took a job with the U.S. government, and the family moved to Virginia when Manchester was nine months old, which is where he did most of his growing up. Having two older brothers, he learned to be competitive at an early age.

In junior high, Manchester was drafted into the school choir, being the only true bass singer in the whole school. That led to being drafted into a rock & roll band as a bass player. In 1967, Manchester’s family moved to Chicago, where he finished high school with a strong background in math and science, but also a continuing interest in music. He went to DePaul University in downtown Chicago and decided, against his father’s better judgement, to major in music, where he took up the cello.

As time passed, he realized that music is a wonderful hobby, but a tough business. So, he moved back to Virginia with some of his old buddies and took up motorcycle racing instead. In the process, he learned motorcycle mechanics, which led to several jobs in motorcycle shops and eventually a job teaching mechanics at Northern Virginia Community College in Alexandria, VA. He was then hired by American Honda Motor Co., Inc., to run a new motorcycle training center being opened in Windsor Locks, CT.

As the motorcycle business began to decline, Manchester took a job in California with the Honda Auto Service Training Department, then with the Honda auto sales and Acura sales training departments.

Manchester retired from Honda after thirty-five years with the company on April 1, 2018 and is now having fun playing the cello and writing down stories from his adventures over the years.

The Stories of a Cowboy and Me