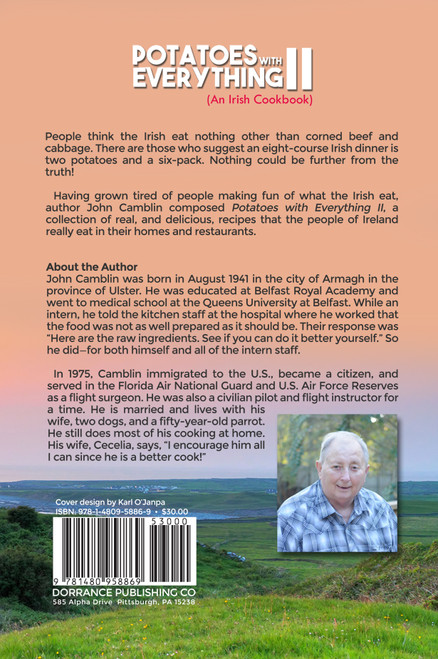 People think the Irish eat nothing other than corned beef and cabbage. There are those who suggest an eight-course Irish dinner is two potatoes and a six-pack. Nothing could be further from the truth!

Having grown tired of people making fun of what the Irish eat, author John Camblin composed Potatoes with Everything II, a collection of real, and delicious, recipes that the people of Ireland really eat in their homes and restaurants.

John Camblin was born in August 1941 in the city of Armagh in the province of Ulster. He was educated at Belfast Royal Academy and went to medical school at the Queens University at Belfast. While an intern, he told the kitchen staff at the hospital where he worked that the food was not as well prepared as it should be. Their response was “Here are the raw ingredients. See if you can do it better yourself.” So he did—for both himself and all of the intern staff.

In 1975, Camblin immigrated to the U.S., became a citizen, and served in the Florida Air National Guard and U.S. Air Force Reserves as a flight surgeon. He was also a civilian pilot and flight instructor for a time. He is married and lives with his wife, two dogs, and a fifty-year-old parrot. He still does most of his cooking at home. His wife, Cecelia, says, “I encourage him all I can since he is a better cook!”

The Smallness of Everything - eBook