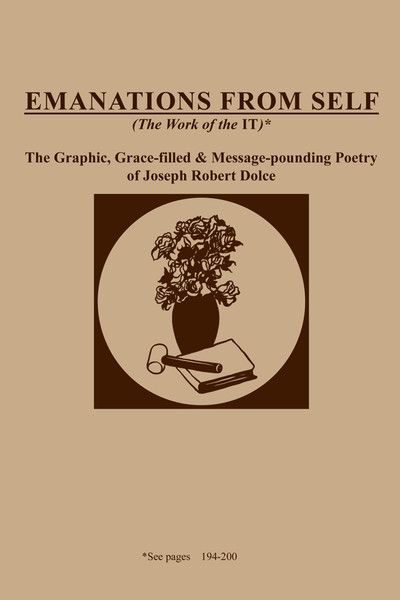 This collection, a purposefully random order of thoughts, is a treatise on life itself.

The book offered here is something that will inform, challenge, amuse or offend just about all who read it.

Joe Dolce, born in Brooklyn in 1935, is a retired pharmacist who has served as a community, hospital and consultant pharmacistand, as an adjunct professor at Albany College of Pharmacy in New York, he was awarded Preceptor of the Year in 1983.

Dolce was the president of the Dutchess County Pharmaceutical Society from 1969 to 82, during which time, he wrote its newsletters and numerous essays and articlessome of which were published in both State and National journals

He has written a novel called Im Mara NowMike Cant Be Here; a book of more than 2000 quips called Mind Spurs and is currently writing a fable called Turkeyland, an allegory on politics and the state of the world as he sees it.

Besides writing, Joes other joy is exercise. His 14 hour per week workout regimen includes cycling, sit-ups, push-ups, free weights, and swimming 3 times a week at a training center nine miles from his home.

Joe is a member of two fraternal and civic-minded organizations: The Italian Center of Poughkeepsie, whose mid-19th Century Victorian Mansion is listed on the National Register, and the Elks Lodge-275 of Poughkeepsiethe Home Lodge of F.D.R.

Joe has always been a student of philosophy, history, politics and nature. His interest is in the engines that run humanity, and the twists and turns they cause.

He resides in LaGrange, New York.