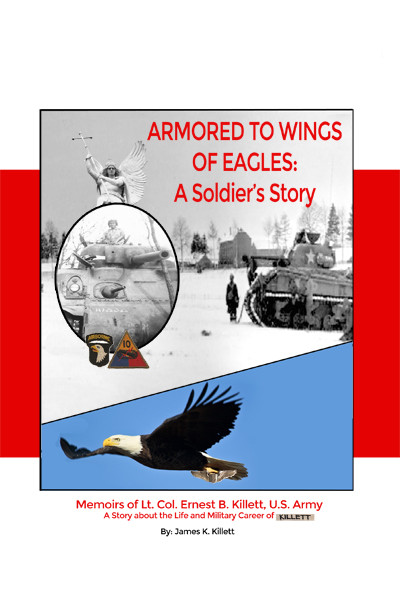 Armored to Wings of Eagles: A Soldiers Story
by James K. Killett

Read a slice of American life. A man enters the military and fights for his country. During his time in the service, he falls in love and starts a family. Leading a rich and full life, his adventures range from war stories to meeting Marilyn Monroe.

James. K. Killett, the youngest son of Ernest B. and Hazel D. Killett, was born in September, 1949, in Munich, Germany. An avid camper, hiker, and backpacker, his real passion was scouting, which began in Germany continued throughout his life.

In 1973, Killett and his wife, Diane, both graduated from Auburn University. His first job after graduating was in Waynesboro, Virginia, working for DuPont. Now retired, Killett is working again on a part-time contract basis.

Killett has been happily married for forty-six years. He found the Catholic Church and our Lord through his wife and has gone on to become a Knight of Columbus. He considers his three children and three grandchildren his most exciting adventure in life.

A Letter from Grandpa Charlie - eBook

I Ate My Whole Sandwich

Miracles of the Heart: Looking Back on God's Pathway