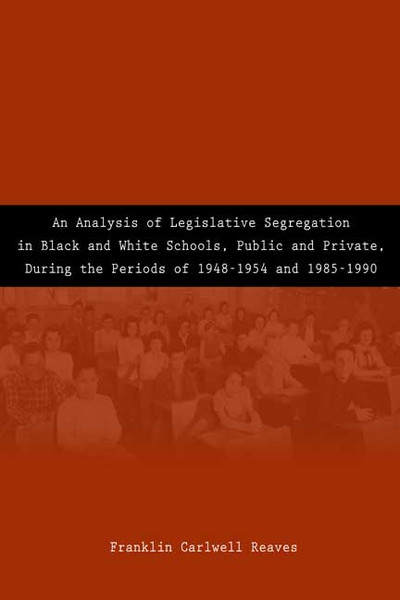 In this dissertation in partial fulfillment of the requirements for the degree of Doctor of Philosophy in Education, University of Santa Barbara, Rev. Reaves examines black and white public and private schools for two historical periods, 1948 to 1954 and 1985 to 1990, thirty-six and thirty-seven years later. Black and white schools are compared across the board and across time, with particular attention to seventeen southern states and the District of Columbia. The effects of federal court cases, the attitudes of white and of black parents, teacher workloads, student/teacher ratios, facilities, fundingits all here. Rev. Reaves presents his extensive research, as well, in twenty tables that clearly illustrate the data he has unearthed. Future investigators of this topic and this period will be indebted to him.

Rev. Franklin Carlwell Reaves has lived in Mullins, South Carolina, his hometown, for most of his life, except for educational excursions into North Caolina and California. He earned his B.S. degree from Fayettevill State University and two M.S. degrees, in history and in administration and supervision, at North Carolina A&T State University. His LL.B degree is from LaSalle Extension University and his Ph.D. from the University of Santa Barbara. It was in Mullins, South Carolina, that Rev. Franklin Carlwell Reaves reared three children with his now-deceased wife, Algenia, who was the childrens stepmother. It is also where he is responsible for the Doctor and Mrs. Franklin C. and Algenia Reaves Foundation Legal Ministry. He has also been involved in the Southern Christian Leadership Conference, the North Carolina Educators Association, the National Platform Association, and the American Civil Liberties Union. Rev. Franklin Carlwell Reaves is a pastor in the African Methodist Episcopal Church and an educator in the Columbus County Schools. When asked his hobby, he says, simply, Helping people. (2007, paperback, 76 pages)

Confessions of a Public School Teacher: A 35-Year Veteran's Assessment on How Public Education Can Make the Grade - eBook

Confessions of a Public School Teacher: A 35-Year Veteran's Assessment on How Public Education Can Make the Grade