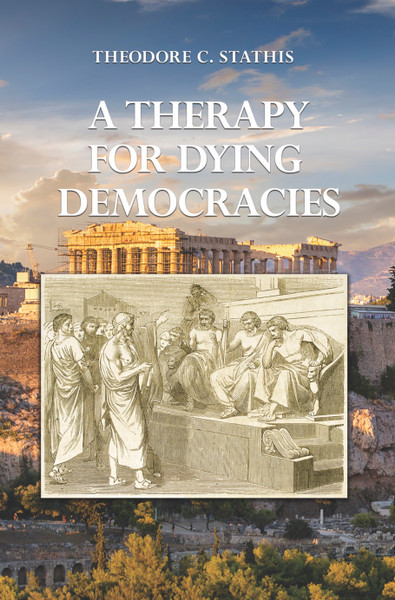 The world economic crisis and the provocatively unjust distribution of wealth have exposed the real crisis, which is a political one. All the malfunctioning democracies that are gradually growing into oligarchic governments have become the main focus of many political experts.

"Are Democracies Dying?" or "How Democracies Die" are a couple of titles belonging to corresponding books on democracy. Because of them, global interest in ancient Greek democracy has been significantly reinvigorated, and even though a lot of publications refer to it, they do not propose any functional and substantial solutions that keep up with the present; as a result, direct democracy is being rejected, not only by the enemies of this political system, but also by well-meaning prominent figures and public officials, who consider it as being nothing but a utopia.

The book contains a remedy for our modern malfunctioning democracies, which suffer from a lack of democracy. Actually, the dying democracies, one by one, are removing their ''democratic masks'' and reveal their real identity, which is oligarchic in nature.

A Therapy for Dying Democracies is a unique proposal and shows how the operational difficulties of ancient Greek democracy can be bypassed, and presents for the first time worldwide an effective way that shows how true democratic governments can be established today.

Theodore C. Stathis has the equivalent of a B.Sc. degree from the Technical University in Vienna, as well as a M.Sc. and an Eng. Sc.D. degree from Columbia University, New York. He is president of the Foundation for Mediterranean Studies. He has worked as an assistant researcher at Columbia University, New York, and as an assistant professor at Manhattan College, New York, and at New York University, where he also worked as a researcher. He was a scientific expert, and later a lecturer, at the University of Patras, and a visiting professor at the University of Macedonia in Thessaloniki.

Dr.Stathis was president of Advanced Acoustical Research Inc. in New York, executive director of N.B.G. Bancassurance, president and executive director of National Capital S.A. (National Bank of Greece Subsidiaries), and Adviser to the Board of the National Bank of Greece, as well as president of the Musical and Educational Organization of Greece (Athens Camerata – Friends of Music Orchestra). He served for 15 years as a Member of the Greek Parliament, and as an Undersecretary for the Greek Ministry of Defense, as a Deputy Minister for the Greek Ministry of Culture, and as Minister of Agriculture.

He is the composer of four operas (three of which have been performed at the Athens Concert Hall – MMA): Antigone, based on the play by Sophocles (see excerpts on YouTube), Opus Elgin: the Destruction of the Parthenon, Alcestis based on the play by Euripides, and Theodora (set in the time of Justinian); he has also composed a number of quartets for strings, and numerous songs. As a writer, he has published several articles on science and politics, and he is the author of National Defense and Its Achilles' heel, In search of a model for democracy today and The Trojan horse of democracy.

A Therapy for Dying Democracies - eBook