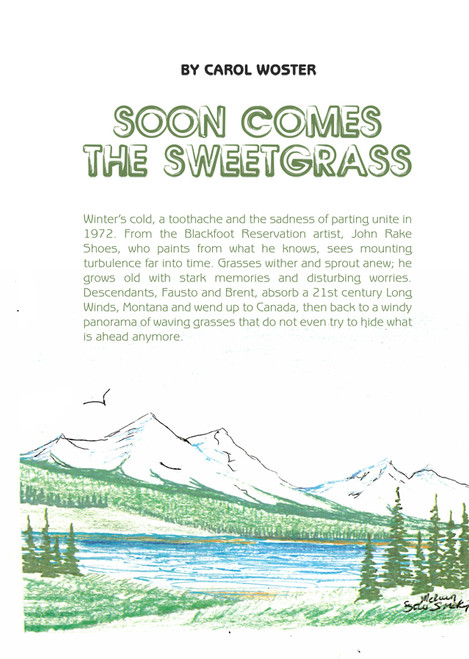 “It’s the grass that never dies,” pronounced the aging farm woman of the plains. Sweetgrass means a lot to these cultures. In the late 1960s, medicine woman Cecile Last Star dug in her worn trunk and gave me a plait of it, and it’s still here intact.

Great cowboy artist C.M. Russell knew well the serrated mountains of Glacier National Park, wide stretches of undulating prairies and colossal fame. A young Ace Powell helped blast for Going-to-the-Sun highway in the early 1930s. His mother had said, “Ace, you are always painting a picture.” Charley Russell died in 1926. Earlier they wove in and out of Apgar, later Ace babysat for Charley’s son. Ace also spent his sophomore year at high school in Browning. Another great Montana artistic genius, Bob Scriver, became a fast friend from those high school sophomore days. Ace would give some of his stretched window shades to young artists in the tribe. Rich genius poured out from these parts. Sweetgrass was a backdrop to daily and sacred activities. Fragrances intermingled with lives. Outsiders called this life vanishing. Not to be believed as artists’ lives dominated the scene. By 1967, Ace made possible for me to stand in the presence of Last Star and witness the beautiful event where she gave me the sweetgrass.

It waves still around these areas and has different meanings for different people. Yet to say this way of life is vanishing… no way. Remember people have hearts…

Carol Woster is a graduate of St. Olaf College in Northfield, Minnesota. Her first published piece in The New York Times Travel section, in February 1968, was on Glacier National Park. Photographs were by the renowned late Mel Ruder, founder of The Hungry Horse News in Columbia Falls, Montana. He won the Pulitzer Prize in 1965.

Following a stint with the Associated Press, Carol wrote “Our European Correspondent” columns from Europe. A researched piece out of Plzen, four months after the occupation of Soviet troops, titled “Czechoslovakia at Christmas” ran worldwide with United Press International in December 1968. Besides writing, she has been Editor/Consultant at The World Bank and the International Monetary Fund, Washington D.C. During the latter part of an eleven-year stay in Norway (1983-1994), she translated the budget for the Ministry of the Environment, Oslo, from Norwegian to English.

The author now resides at Cut Bank, Montana. She is the author of Nearing Hungry Horse.