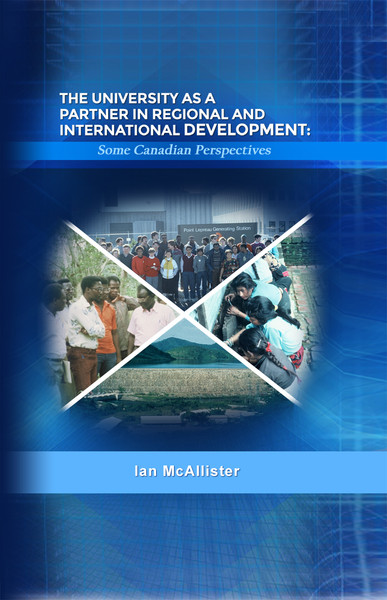 The University as a Partner in Regional and International Development: Some Canadian Perspectives
by Ian McAllister

To be credible partners overseas, universities must be credible partners for the well-being of the peoples of their own regions. Canadian universities have enjoyed long and productive histories of both regional and international cooperation. Many were nurtured through early relationships with longer standing European and US institutions. Especially since Canada became a serious aid donor in the early 1970s, Canadian universities, in their turn, began to share experiences and resources overseas. Initially this was with institutions in less prosperous nations; then, particularly since the fall of the Berlin Wall, it was also with partners in the transition economies of Eastern Europe. Most recently it has been with China and a resurgent India. Often a universitys regional and international linkages began with individual faculty or student commitments. Some then evolved into projects (frequently four or five year contractual arrangements), supported by aid agencies. A few such projects later expanded into more open-ended network arrangements bridging disciplines, sectors, institutions and sometimes even continents. The more complex some of these partnerships have become, the more challenging have been the ethical, academic, and financial implications for the Canadian institutions themselves, not to mention their counterparts. Long term, more visionary and more strategic approaches have become critical. More entrepreneurial administrative structures and much heightened sensitivities to human rights, cross-cultural, gender and inter-disciplinary issues have been essential. What, it must ruthlessly be asked, are the visions for post-secondary education for 2020 (not to mention 2050) that are empowering the more progressive of todays institutions? How are they helping shape present regional and international development partnerships?

Ian McAllister, long-time a professor of economics at Dalhousie University, has also served on two royal commissions, been an economic adviser to a number of governments (Canadian and overseas under CIDA auspices), as well as been the senior development adviser of the International Federation of Red Cross and Red Crescent Societies, Geneva. Books written by him include: Regional Development and the European Community; Sustaining Relief With Development; The University as a Partner in International Development; and Through a Glass Darkly From Disaster Relief to Modern Peacebuilding.