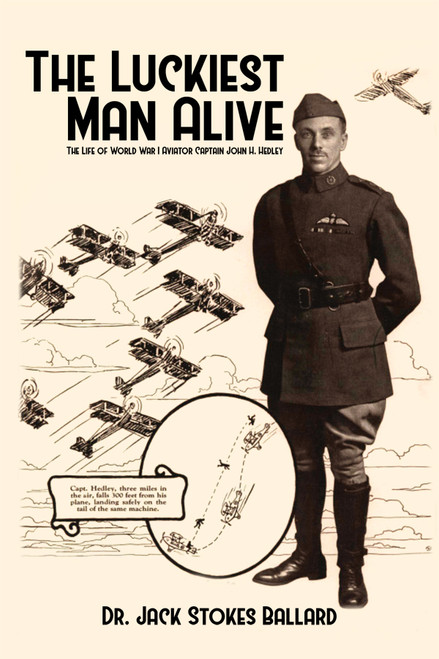 As the one hundredth year anniversary of World War I continues, discover more information about Captain John H. Hedley. Follow the experiences of this little-known British aviator as he evolves into an ace crewman in the observer cockpit. Holding a unique place in aviator lore, he survives a fall from his observer’s seat by landing on the tail of his own aircraft!

Documents and artifacts, recently made available by Hedley’s grandson, contribute to the description of Hedley’s signature event, his prisoner of war status in World War I, and his postwar transition to an American citizen. Read all the amazing details in The Luckiest Man Alive: The Life of World War I Aviator Captain John H. Hedley.

Jack Stokes Ballard holds a Ph.D in American history from UCLA, taught history at the U.S. Air Force Academy, served a 27 year career in the Air Force, and worked for Martin Marietta (Lockheed Martin) Corporation.  He has authored articles and seven books, including War Bird Ace and The 147th Aero Squadron, both regarding World War I aviation history.  He currently resides in Centennial, Colorado.

The Miracles in the Life of Abeth - eBook