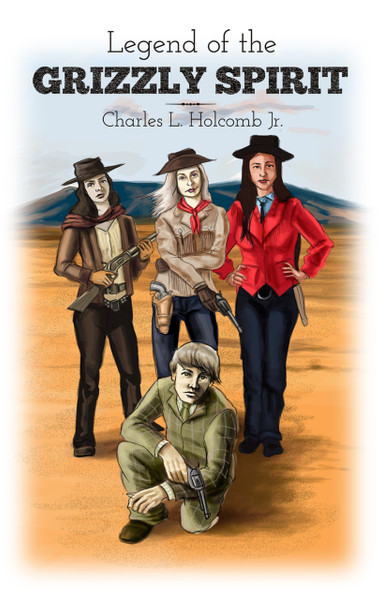 The Legend of the Grizzly Spirit
by Charles L. Holcomb Jr.

The Legend of the Grizzly Spirit by Charles L. Holcomb Jr. tells the tale of Matt Saxton, a young man from New York City who travels across the country on the Oregon Trail, as he makes his way to Portland with a band of other Americans.

Matt has always been the kind of person who stands out in the crowd, as he is resourceful, smart, brave, and cunning.

Throughout the novel, Matt faces the conflict of growing up, as he is forced to understand what is right and wrong, while using his natural ability to protect others.

This western themed novel follows his adventures as he has run in with Indians, wild animals, and treacherous conditions of nature. As the narrative goes on the fable of Matt grows, as he tames a wild horse, saves the lives of multiple men, and charms four different ladies to fall in love with him. As we follow along the journey to achieve American Expansion, this epic novel binds together elements of historical fiction and romance. One part tall tale, and one part legend, Holcombs book is sure to entertain.

About the Author: Charles L. Holcomb Jr. was raised on a dairy farm. During high school he played football. Drafted, he spent two years training for Vietnam and became an expert marksman.

After the army, Holcomb worked construction and drove over-road trucks for J. B. Hunt Transport.

Holcomb retired in 2010. Now he spends his time gardening, hunting, and playing golf.