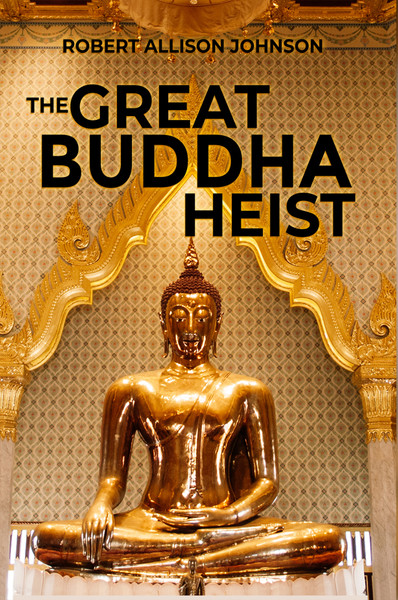 It was nearly two decades ago when my wife Suzanne and I enjoyed a post-retirement trip to the Far East as tourists. Hong Kong and Singapore proved to be very interesting and definitely worth a visit. Our final stop however, was Thailand, whose charming people and culture proved to be the high point.

On our final day in Bangkok we happened to visit a Buddhist Temple whose feature attraction for us was a five ton solid gold statue of a seated Buddha. I had never seen that much gold in one place before. A quick mental calculation of the value of its gold content produced a figure in excess of 150 million dollars. With that in mind, I could not resist the temptation to imagine how it could be stolen by an irreverent and unscrupulous gang of thieves. This work of fiction is the result.

One of our daughters who reviewed an early draft of this book quipped that it revealed that her father possessed a latent criminal mind! Fortunately, (if this is so) the tendency has continued to be latent and has found its sole expression in the pages of The Great Buddha Heist.

This criminal plot to steal the Buddha is, to my mind, so plausible and feasible that I plan to send the first copy of this book to the Chief of Police in Bangkok so that he or she may take appropriate measures to protect this national religious treasure from people whose criminal intent is more forceful than mine.

Johnson holds a Bachelor of Arts degree in history from Harvard University and a Master of Business Administration from Western New England University. He received numerous awards and honors during his business career and has been listed in Who’s Who in America for more than thirty years. He and his wife Suzanne currently live in South Carolina and have four daughters and four grandchildren, all of whom live in the South. Now in his ninetieth year, with severe macular degeneration and unable to read for himself, he still enjoys creating the written word.