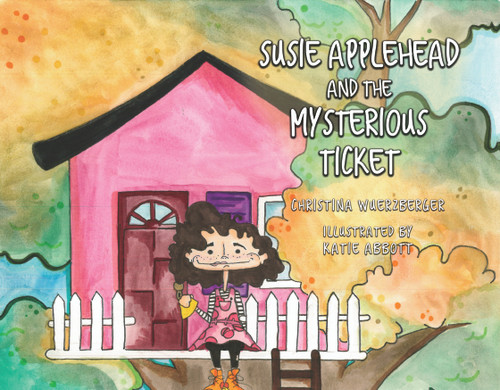 Susie Applehead is a bright young girl with a colorful imagination who loves adventure. When she finds a ticket by her beloved playhouse her dad built, she sets on a quest to find where the ticket originated from. Through her imagination, her backyard friends are able to communicate with her to help give clues to solve the mystery. Susie displays problem-solving skills by using her creative mind and the unbreakable bond between a father and daughter. Young readers are encouraged to get out and explore to find amazing discoveries with their own brilliant imaginations. You just never know what you might find hiding in your own backyard!

When she was eight years old, Christina Wuerzberger created Susie Applehead originally as a grown-up detective who could communicate with animals, in a story that was turned in as a second grade project. Twenty years later, now with a husband and two beautiful daughters of her own, Christina found the story she had written as a child inside of a box tucked away in her parents’ closet. She reimagined the story in a way she knew her daughters, Anabella and Charlotte, could relate to, and thus Susie Applehead and the Mysterious Ticket was born.

Besides writing, Christina also enjoys spending her time volunteering at the school and being a Girl Scout leader. As a family they love to give back to the community and organize various different drives in which they get the school, family, and friends involved.

Alphabet Fruit Salad: ABC... Good for You, Good for Me - eBook

The Crusade: Chronicles From The Beast of Modern Day

The Night Before Christmas?: A Poem and a Parody - eBook

Beyond the Glitz and Glamour - eBook