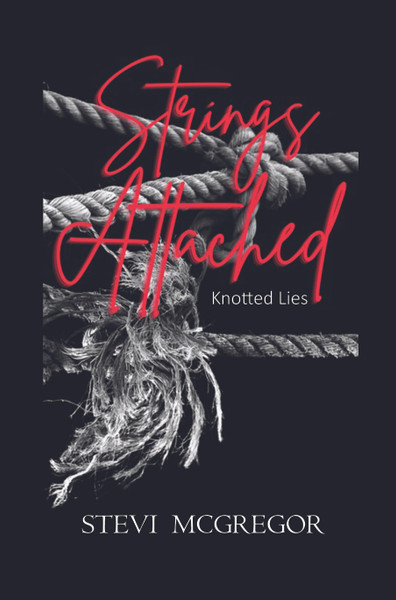 Money, Sex, Love, and Murder—more money than you can count, more mind-blowing sex than you can handle, the fairytale love you never thought you’d find, and the gruesome murders you never thought you’d be a part of. Miko Lehaun, a global senior makeup artist, takes a wild ride of life’s twists and turns that leaves her head spinning in the most enticing but savage ways. Miko and her three college friends, close enough to be considered family, are living their best lives, building empires and partying like rock stars, when an unexpected heart-wrenching loss changes their relationship dynamic forever. As they discover the very people closest to them aren’t who they seem, they find themselves tangled in a knotted web of lies and deceit. When their appetite for the truth begins to fuel their motive for revenge, they realize their red-bottomed soles leave footprints and their expensive manicures leave bloody fingerprints.

Strings Attached: Knotted Lies is book one in a multibook series of twists, turns, sex, lies, murder, and love. See how the story ends…or does it?

Born in North Carolina but raised in Dallas, Texas, Stevi McGregor has the perfect mixture of what she calls Southern Charm with attitude. Former child model to a few popular brands, serial entrepreneur to a few of her own, she is now a proud wife and mother of three boys and two pit-granddogs. After sitting in the CEO chair of her own company for four years, she decided to cash out and grab her laptop to look for her next entrepreneurial gig. She took a quick life detour to study French and Greek Mythology but eventually went on to study at Villanova and Full Sail University for Creative Writing for Entertainment. Her original plan was to get into the entertainment industry to hopefully write for some of television’s biggest bingeworthy shows. That is, until she met Miko. In a vivid dream one night, this beautiful, tough-as-nails ambitious woman introduced herself and Stevi fell in love with her. She needed to write her story, to explore her character and let her life evolve on her blank page. Before she knew it, she was halfway through her first book, and she was addicted, completely hooked. Six novels in, Stevi has realized writing is her new gig and with every click of the keys she meticulously designs one plot twist after another that will leave her readers on the edge of their seats wanting more.

The Witch and the Priest of Lies - eBook

Until I See Stars - eBook