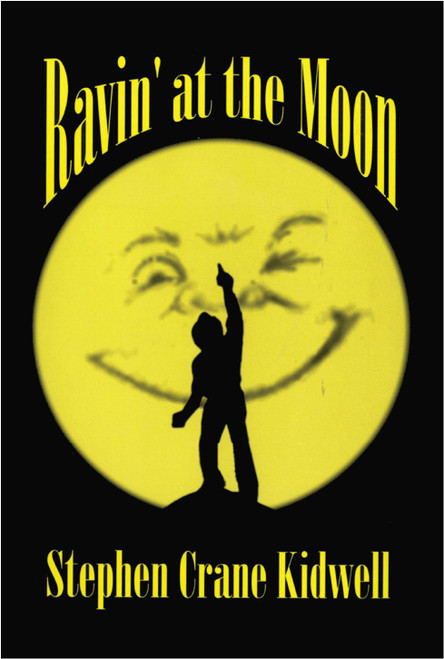 Ravin' at the Moon is a fictional study of contemporary life by first time author, Stephen Crane Kidwell. The story begins in the early 1970's and traces the trials and tribulations of a rather, bright ambitious young man who is caught in the cultural conflict between war protester and baby boomer brought on by the changing mores of the times. The episodes chronicled in the tale probably resemble those of a large number of people caught in the vagaries of human change experienced in the two decades following the sociological revolution of the sixties. These vignettes are interwoven with the philosophic ramblings of a nameless observer who is perched on the protagonist's shoulder throughout his ordeals. Each day the protagonist, Joey Hews, wakes up to a random tune playing in his head. The tunes are all from the pre-Disco treasure trove of music and usually set the tone of that part of his life.

Ravin' at the Moon is a quick reading, timely piece which should be easy for the vast majority of those people who grew up in the chaotic sixties to identify with. It is controversial but well thought out and symbiotic of the times; a bit nasty without the tastelessness of the "F" word while attempting to be amusing and entertaining. The characters are just bizarre enough to be real as are the situations. Settle in with the story and enjoy!

About the Author
After moving to the Florida Keys and a stint fishing lobster, he is now working on his second book of the trilogy, Backseat Driver, which is set in the same time period but from a female point of view.

Ravin' at the Moon - ebook

Happiness Is Your Responsibility: Peggy’s Playbook of Motivational Moments