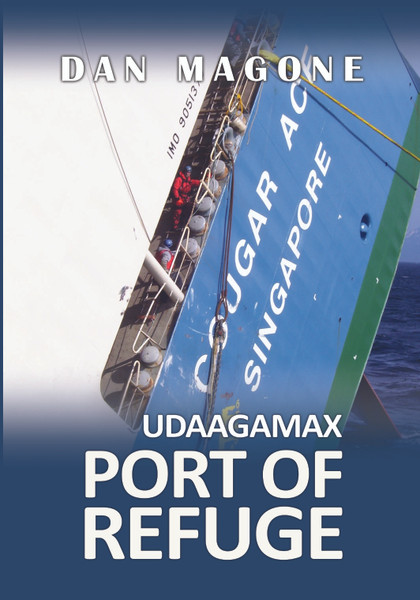 After his forty-plus-year career in emergency ship repair and marine salvage in western Alaska, Dan Magone knows the grit and Grace required to survive Alaska’s brutal marine frontier. This episodic memoir records his breathtaking experiences at sea and the high adventure and discouraging setbacks that accompanied it.

Touching on environmentalism, spirituality, race and ethnicity, as well as friendship, leadership and loyalty, Port of Refuge: Udaagamax proves industry is what you make of it.

Dan Magone is a longstanding member of Unalaska Christian Fellowship, supports the Unalaska Native Fisherman’s Association, and is a regular at the city’s annual School Career Day where he does his best to inspire students in career ideas. But Magone is best known for being the guy that the fishermen, the city, or any local can call when they need help quick.

During his career, Dan Magone personally directed the successful salvage or wreck removal of seventy-nine vessels and has been awarded two Public Service Commendations by the USCG. He received his commercial diving certificate in 1971, has maintained an Explosive Handlers license since 1990 and has extensive experience in underwater welding and ship repair. Magone enjoys the sea, freediving, subsistence hunting and gathering, and he loves to design and create things for clients and family. Always the storyteller, Dan finds a new expression in writing, as he spends more time with his wife, family and adventures with his grandchildren Sophia and Carter.