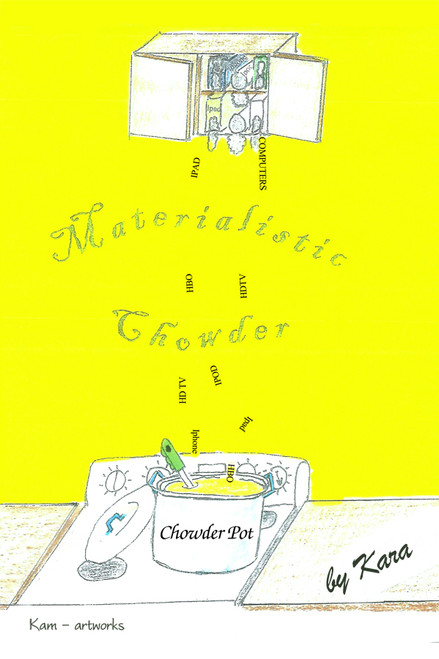 Life is wrought with challenges and is not unusual to see and hear people complain about hardships, big or small. By doing so, however, they tend to overlook the positive side of life and disregard the things that should be appreciatedblessings that come in various forms such as love, family, friendship, wonderful memories, life lessons, and many others.

In Materialistic Chowder, Kara shares her collection of poetry which serves as a looking glass through which the author aims for the reader to see life in a new and positive light. With poems such as Memories, The Sands of Time, and Music in Your Heart, the author evokes positive emotions to motivate others to grasp lifes positive aspects and cast negativity aside.

Kara is a 73 year-old widow who has two (2) grown sons and four (4) grandchildren. She comes from a family of ten (10) children (5 boys and 5 girls). Her parents worked hard to ensure the children grew up as honest, law-abiding members of society, and allowed each one to pursue their goals in life.

Kara came from a family of veterans, with four (4) of her brothers serving in the military. She also served in the US Army during the Viet Nam era and served her tour of duty at the Brooke General Hospital in San Antonio, Texas.

After working 39 years in the private sector, Kara decided to retire, which has allowed her to indulge in spending time with her writing, family, friends and her rescue dog Remington. She is currently living in the Western New York area, with plans in the near future of moving closer to family.

Karas life mission has changed since retirement, in that she wants to accomplish the goals she has set for herself, with hopes of completing them. She does volunteer work as a counselor for crisis intervention and abuse.

Kara has friends who have allowed her to write poetry for them, which she has graciously included in her book Materialistic Chowder.