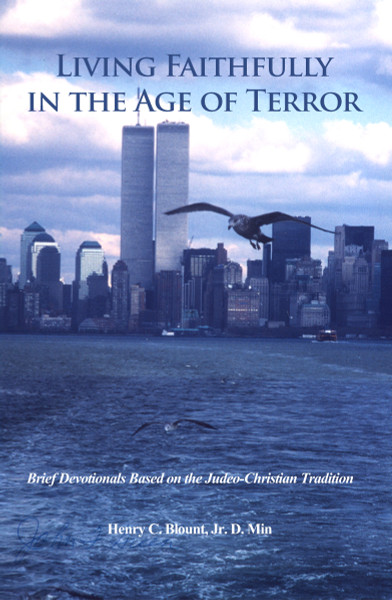 Living Faithfully in the Age of Terror: Brief Devotionals Based on the Judeo-Christian Tradition
by D. Min. Henry Blount, Jr.

In this collection of essays and articles, including sermons and columns written for the Cen-La Focus, Henry C. Blount, Jr. D. Min walks us through his faith and unique way of seeing the world. Wise, worldly, and always quick with a quote or a witticism, these are meditations on life in a time of uncertainty that will bring comfort to anyone seeking it.

Living Faithfully in the Age of Terror is the culmination of a lifetime of study, and brings together the experience of a man who has counseled families for decades. It offers Blounts spin on subjects from displaying Grace to thumping watermelons, truly demonstrating his commitment to a dynamic Christianity that seeks truth wherever it may turn up sometimes the most unlikely places.

Henry C. Blount, Jr. D. Min has spent the better part of his life ministering to churches throughout Louisiana. Though he retired from the First United Methodist Church in Alexandria in 1992, he has remained active in the community and was named Pastor Emeritus in 2013. He has taught subjects including philosophy and world religions in four different Louisiana universities, and led courses on pastoral functions at the Drew Theological Seminary.

He lives with his wife, Joann, in Alexandria, Louisiana. He lost his first wife, Marilyn Speede, to Alzheimers in 2006. Blount has three daughters, two sons, eleven grandchildren, nine great-grandchildren, one step-daughter, and two step-grandchildren.