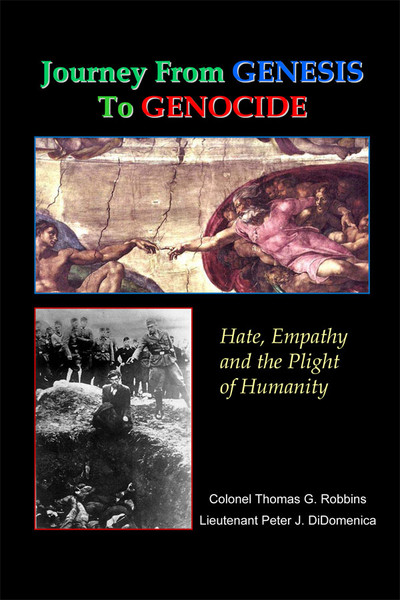 Journey from Genesis to Genocide: Hate, Empathy, and the Plight of Humanity
by Peter DiDomenica and Thomas G. Robbins

We are all familiar with the violence that results from anger and rage a momentary reaction to a provocation that results in destructive behavior. But what is it about human nature that allows entire populations to engage in the wholesale destruction of another population with cruel efficiency and little or no remorse or guilt? In the twentieth century deliberate and planned destructive behavior on massive scales resulted in more than 160 million deaths, nearly equaling the entire population of the world at the time of Jesus Christ.

This book is an insightful and inspiring exploration of the depths of the human soul that combines the latest scientific knowledge with vivid historical examples and the authors real world experience as career law enforcement and homeland security officials. This journey is presented with a unique and paradigm-shifting perspective on mans capacity to commit extreme atrocities, including ethnic cleansings and genocide, as well as mans ability to engage in selfless acts of compassion.

The authors focus on the one emotion that brings man to the apex of evil - hate- and the emotion that is key to our altruism - empathy. The authors persuade the reader that the control of hatred and fostering of empathy are critical to our ultimate survival as a species. These two emotional states are the polar opposites that determine who we are willing to destroy and who we are willing to save.

Peter J. DiDomenica is a retired lieutenant from the Massachusetts State Police who served for 23 years. After the 9/11 attacks he served as the Director of Security Policy at Logan International Airport where he developed innovative anti-terrorism programs including creation of the behavior based screening program adopted by the Transportation Security Administration (TSA) know as SPOT. He has served as a subject matter expert on behavior analysis for the U.S. Army, Transportation Security Administration, Department of Homeland Security, and National Science Foundation. He has been a lecturer on terrorism related issues for the FBI, CIA, Secret Service, DHS, and the Department of Defense. He holds a Juris Doctor from Western New England University School of Law. He presently is a trainer and consultant on homeland security and biased policing.

Thomas G. Robbins retired from the Massachusetts State Police after a 27 year career culminating in his appointment as the superintendent in 2004. Shortly after the 9/11 attacks, he was asked by the Governor to take over as the Director of Aviation Security for Logan International Airport. During his tenure he developed many security firsts for Logan Airport leading to the airport being recognized as a national leader in aviation security. He served as the incident commander for the arrest of Richard Reid, the so called shoe bomber, at Boston Logan Airport in December 2001 and was a key official that developed and oversaw the security for the 2004 Democratic National Convention in Boston, the first such post 9/11 national convention. He holds a Jurist Doctor from Suffolk University Law School. He presently is a trainer and consultant on homeland security and biased policing.