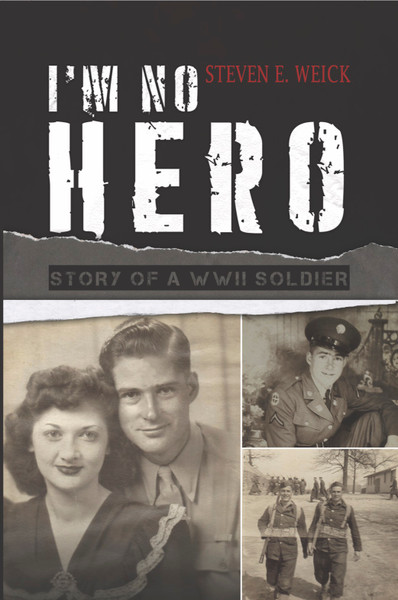 I’m No Hero: Story of a WWII Soldier

Growing up, Steven E. Weick heard very short snippets of his father’s time in World War II. But like many veterans, his father never talked much about his harrowing experiences. After graduating high school and joining the Air Force, Weick’s father decided it was time to share with his son more in-depth the journey, small joys, and traumatizing moments from his time in the trenches of WWII.

After his father’s passing in 2012, Weick dove into more research about his father’s unit and scoured through thousands of morning reports, battle narratives, causality reports, after-action reports, and company rosters, resulting in I’m No Hero: Story of a WWII Soldier, a retelling of his father’s experiences in WWII along with historical records to show the everyday life of one solider fighting in one of bloodiest wars in our nation’s, and the world’s, history.

Steven E. Weick is a disabled Vietnam-era Air Force veteran. He has been involved with various veteran groups and volunteers to support other veterans. After growing up on a farm in Oregon and leaving the Air Force in 1978, he attended the Oregon Institute of Technology and received his degree in Electronic Engineering Technology. In 1998, he received a second degree in computer sciences. Currently, he has worked as a senior technical writer with Axcelis Technologies for twenty-one years.

Weick lives with his wife Ruth, stepson Tim, and their Jack Russel terrier. In his free time, Weick and his wife enjoy taking cross-country road trips on their Harley Davidson, each time with their little pup in the saddle bag riding along with them.

Ouch, There's a Pebble In My Shoe