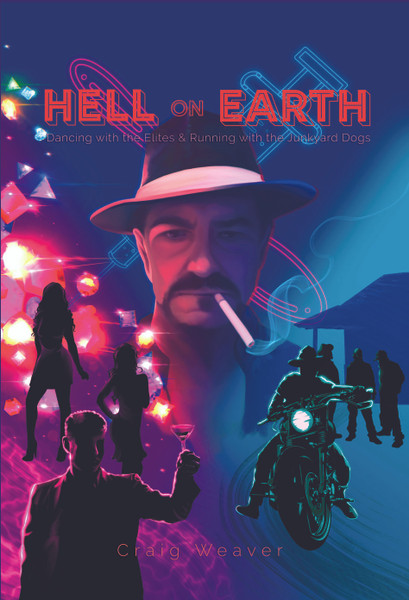 Craig Weaver comes from a great family, full of overachievers on both sides.

A combination of intense childhood events, a traumatic injury, and a drug addicted doctor led Weaver to become an opioid addict at age 20. Still, he managed to maintain and become very successful. He combined two separate businesses into one colossal Home Delivery Service! Gourmet food and precious metals and diamonds! Weaver has lived two lives in one. His drug addiction took him to the secret societies hidden in backstreets of all cities and towns, yet he was socializing with the elites of the same towns. To survive, he would pretend he was in a thriller movie. For decades he hid his secret life. His addiction grew. He dove down the rabbit hole, descending to his own Hell on Earth. he became a desperate animal. At 120 pounds, organs shutting down, too afraid to commit suicide, Weaver reached his precipice. Then he had an epiphany. Enter the power and glory of God! A persistent vision of huge skyscrapers toppling down onto one another. It came to him. He must lose all to save himself! Everything must go! All money. All material wealth. He must become one with the earth.

Thirteen years later, here he sits. Weaver is alive and blessed. He is on a new journey, but this time, God is with him. Someday Weaver will meet Him in the universe. The movie is playing on.

Craig Weaver is an adventurer and has traveled the world. He built a colossal home delivery service and had thousands of customers in three states, spanning eleven cities. He grew up in a small town USA and became the American Dream. He enjoys playing guitar, painting intriguing figures, and helping his fellow man. He has started an Opioid Crisis movement and has found religion. He is a work in progress.

Walking in the Valley of the Shadow of Death: God guidance that's where I met Jesus

Before I Start Singing

Invisible or Not: The Young Girl that Perceived Herself as Invisible

God's Love is Forever: Food for the Soul