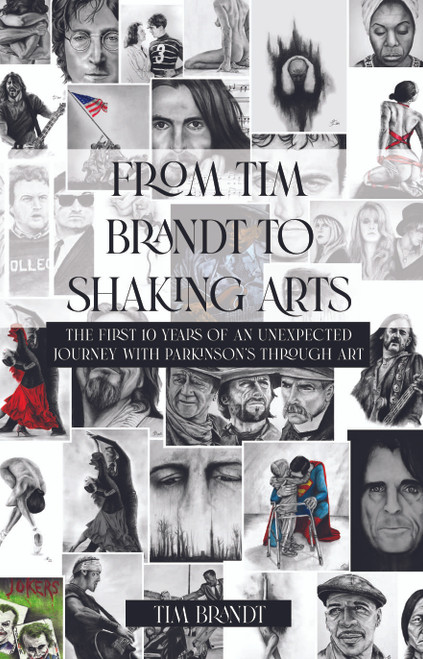 Unpredictable, inspiring, entertaining, realistic, and sometimes emotional are words used to describe author Tim Brandt’s voice. His artwork is like how his mind is now, as a result of the Parkinson's, all over the place. One moment, he may be completing a series of joyful, dancing pieces, and then suddenly begins to create a new, raw, emotionally charged piece. The art within these pages is Brandt’s way of coping with his Parkinson's disease. From Tim Brandt to Shaking Arts tells his story of progressing with the disease while embracing changes and finding a new meaning to the world around you. We are not defined by our illnesses, but by what we do with what we are given. He hopes his words and artwork provides a connection and inspiration to even one person who reads his tale and ingests his art.

Tim Brandt holds a BFA in photography. He worked in the corporate realm before his diagnosis as a purchasing agent. When he found himself unemployed, he began focusing more on his family and his art. Ten years ago, he was on the board of directors for his local YMCA and donated works of art all over the world for charity. He has been married to his beautiful and strong wife, Paula, for six years. Combined, they have seven children, two girls and five boys. His family is very important to him, and he is fortunate to have both his parents and non-legal brother. Unfortunately, he lost his sister twenty years ago from health issues. Brandt enjoys hockey, music, going to concerts, plays, operas, ballets, and all things art and pop culture related.

Tears Flowing from My Heart

What Time's the Next Color? A Story About the Color Wheel - PB