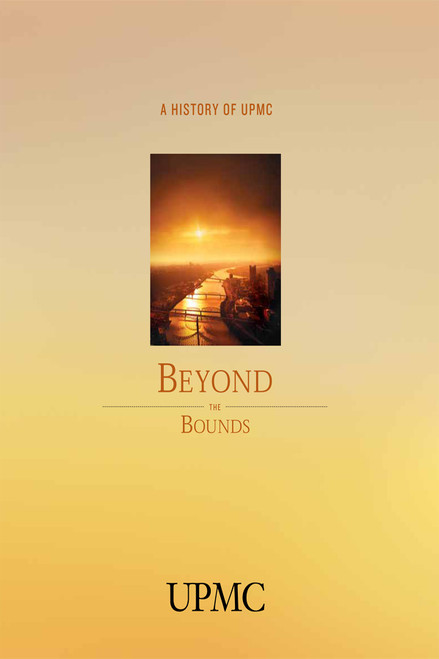 Beyond the Bounds, by Mary Brignano, presents the exciting, dynamic, and unlikely story of how the architects of UPMC, the University of Pittsburgh Medical Center, created a remarkably successful global health enterprise and, in so doing, transformed the economic landscape of Pittsburgh and western Pennsylvania. Spanning 35 years, Beyond the Bounds details the ways in which two improbable heroes and their colleagues defied tradition, convention, and the dominant hospital and health care provider paradigm to grow faster and more robustly than any other medical center or nonprofit health system in this country.

Brignano writes in the books introduction, UPMC was created out of the University of Pittsburgh. The two have risen together in national and international prestige UPMCs founders followed one core principle: Research and clinical success are synergistic and interdependent. What is good for one is good for both. Those founders were Dr. Thomas Detre, a survivor of the Holocaust and the Communist takeover of his Hungarian homeland, and Jeffrey A. Romoff, the social anthropologist who came to the university with Detre in 1973 and who remains UPMCs president and CEO.

Beautifully photographed and clearly written, Beyond the Bounds tells the story of how these two visionary and passionate protagonists adventurers, futurists, and outsiders followed their own dreams in forging alliances and building partnerships in ways never previously attempted. Their ingenuity and entrepreneurship bring to mind the towering achievements of 19th century Pittsburgh industrialists Carnegie and Frick, which took place in the same city but in a very dissimilar time and a vastly different industry. Not only were Detre and Romoff, the co-authors of this modern-day, groundbreaking saga, unique, but so also was the environment in which they found themselves. Pittsburgh, the financial, cultural, and academic hub of the region, is the second-largest city in the state, with no other major urban area nearby. And it has, within its community, key philanthropic foundations committed to improving the quality of life for the people of the area. All of these factors played critical roles in UPMCs growth and success.

UPMC, now the largest employer in western Pennsylvania, is an $8 billion integrated global health enterprise that includes hospitals, cancer centers, retirement and long-term care facilities, surgical centers, specialized imaging facilities, inpatient and rehabilitation treatment centers, and more. UPMC has built one of the countrys fastest growing and most successful provider-based health insurance plans. It has developed a hospital in Italy for organ transplantation and will also manage biomedical research there; UPMC operates two cancer centers and a hospital in Ireland; it is improving emergency medical care and established the first Level 1 trauma center in Qatar; and it will manage hospitals and cancer centers in Cyprus and conduct family medicine consulting in Japan. And with its influence and prominence, UPMC is marshalling its resources to encourage and support the formation of new companies in Pittsburgh and to stimulate economic development in the region.

In addition to Beyond the Bounds, Mary Brignano has authored or co-authored more than 40 histories for prestigious foundations, cultural organizations, businesses, hospitals, and schools. She is a graduate of the University of Wisconsin and holds a masters degree from the University of Pittsburgh. In her book, the author quotes G. Nicholas Beckwith III, chairman of the board of directors of UPMC, who states, Our relative infancy hasnt allowed us to gain the exposure nationally that we deserve right now. That will come in time. The publication of this book will go a long way toward ensuring that his prediction will soon become a reality.