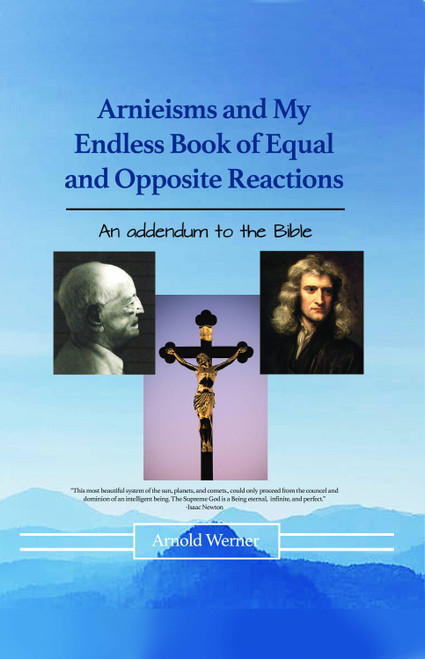 Arnieisms and My Endless Book of Equal and Opposite Reactions spans the life of Arnold Werner and his family as well as contains myriad observations that bring together Newton’s second and third laws of motion, the biblical story of Armageddon, the day of judgment, and the end of the earth. Unlike others who contend that viruses such as COVID-19 are signs of the end, Werner emphasizes that true Armageddon is the end of everything, not only the lives of some, and rather than focus on the bleak nature of the end, readers will find within these pages an optimism and way of seeing the world in terms of equal and opposite reactions that Werner has developed over the course of his life. At its core, Arnieisms and My Endless Book of Equal and Opposite Reactions is a book about love, and in the end, readers will come away with a new perspective on life and the world around them.

An energetic member of Section 0-308, A.H. Werner prepared himself for the future by participating in extra-curricular activities, in the Drum and Bugle Corps, Glee Club, First Class Committee and Sailing Club as well as Cadet Officer. His well-rounded education and Kings Point experience prepared him for the very dangerous position of sailing on tankers carrying high-octane gasoline to Scotland, England and the Island of Guam in the Pacific. Arnold felt his major contribution to the war effort was delivering aircraft fuel to war zones. It is very probable that the air-craft fuel his ship delivered to Guam on his last trip fueled the Enola Gay, which dropped the first atom bomb on Japan.

After leaving the Merchant Marine, he worked as operating engineer for a textile firm and then as Chief Engineer for Adolph Gobel meatpacking firm in New Jersey. Working as Chief Engineer for FMC Corporation at the Carteret, New Jersey chemical plant, he was later transferred to the South Charleston, West Virginia plant in 1956 as the Utilities Engineer. He was promoted to Assistant Maintenance Superintendent in 1966 and subsequently became Safety, Training and Health Director for the FMC South Charleston and Nitro, West Virginia plants. Arnold retired in 1983 and worked under contract as a consultant for FMC in the Safety and Health field, visiting numerous plants throughout the country.

While he was building his career, Arnold was also very busy on the sidelines. He published articles about utilities in chemical plants. He served as President of the Kanawha Valley Industrial Emergency Planning Council, which eventually became a model for local Emergency Planning Councils throughout the country. He served as Chairman of the annual West Virginia Safety Conference, was a member of the National and West Virginia Safety Councils and a member of the West Virginia Mechanical Engineering Society. He was founder and president of a local Toastmasters Club and Founder and President of FMC Employees Credit Union. He also published numerous chemical instruction books for use in plant safety and health. His recognition of chairmanship of “The SPIRIT of ’76 – Freedom from Accidents” by then Governor of West Virginia, Arch A. Moore, Jr. shows how Arnold’s contributions to safety were so highly regarded.

Arnold does thank Kings Point for his successes – and most specifically by celebrating his 60th Anniversary of graduation with a gift for the future Midshipmen via a Will Provision in the amount of $220,000 (with the hope of future gains) funded by his IRA.

Arnieisms and My Endless Book of Equal and Opposite Reactions - eBook

My Steps to Serenity: A Journey Through the AA Steps to Recovery

From the Desk of G. A. Jenkins: Divinely Inspired to Share Hope and Encouragement

Memories from the Cloud of Life - PB