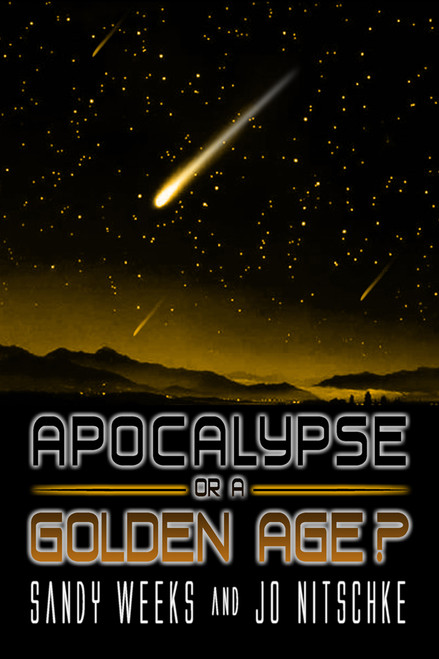 SPECIAL! Watch the video documentary below!

Apocalypse or a Golden Age? Sandy Weeks and Jo Nitschke

Sandy Weeks and Jo Nitschke have presented some fascinating views on the controversial hypothesis of possible events to occur in 2012, which have long been foretold, even as far back as the Mayan people.

The story is told from the viewpoints of brothers Zac and Jake, and their friends Lil, Emma, and an illusive aboriginal named Jimmy. While the tale begins with the witnessing of a seemingly supernatural event, which could be a day of reckoning, their thoughts take them back five years to a time when a mysterious, ancient map was found, which takes the four main characters on an extraordinary journey of discovery.

To quote the authors, Was it a supernatural event interpreted as the return of an expected savior that was now happening before their own eyes, or was it a hoax? They combine their four different specialties in an attempt to determine the nature of this event and what it means to the world.

Sandy Weeks, a medical research scientist by profession whose career spans forty years, is widely published in peer-reviewed medical journals, health-related books directed toward the layperson, magazine articles, addresses to a wide range of community groups on preventative medicine, and is a regular correspondent to the Australian Broadcasting Corporation on health issues and disease prevention, winning a radio broadcast award on genetically modified foods in 2001.

Jo Nitschke has spent over twenty years building an extensive library and knowledge base of technological, esoteric writings, and publications that are not necessarily covered by mainstream media. She is a professionally trained registered nurse who is now a film-producer and editor, with specific interests centering around productions concerning preventative medicine, which made partnering with Sandy Weeks in the writing of a volume of this nature ideal.