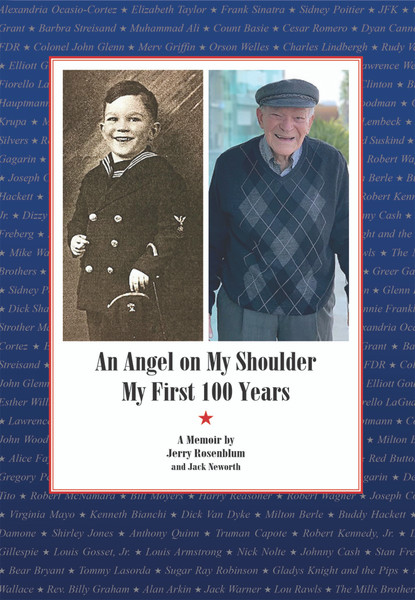 By: Jerry Rosenblum and Jack Neworth

• "You're an A' student and a wonderful storyteller."

• "Your mother was a delight and so is your memoir.

• "Your book is fast –paced, poignant and funny."

•As I recently turned 90, Jerry is my new role model."

“After my father’s funeral, my aunt Mildred admonished, ‘Jerry, now you’re the man of the house.’ I was 12 and it was the height of the Depression. How was I going to do it?”

“Panicked by Orson Welles’ ‘War of the Worlds,’ radio broadcast, my boss, Mr. Wiener, who owned the drug store, raced out the door. I assumed to fight the aliens or sell them some Pepto-Bismol.”

“During WWII, my racist co-workers threatened, ‘We don’t appreciate you with the nig*er.’ “I’ll eat my lunch with whoever I want,’ I said defiantly, hoping they didn’t see my knees knocking.”

“On a troop ship heading home on leave, I rolled 11 straight passes. If I’d been in Vegas, I’d have owned the hotel.”

“My most charismatic customer was Muhammad Ali, the most relaxed was Bing Crosby, and the most menacing was mobster Alan Dorfman who wound up murdered, gangland style.”

“Because of the unexpected steep grade, I fell. I lay helpless in the street, 96-years old, bleeding and unable to get up. But after being rescued I wondered, had I finally met my guardian angel?”

Jerry Rosenblum has lived in Santa Monica since 1971. At 87, he started his memoir and finished at 97. (He's now talking "sequel. ")Ever-busy, Jerry takes classes at Emeritus College; attends lectures; reads voraciously; wins, senior amateur singing contests; has been on 3 podcasts; and has 21,000 lnstagram followers. (if only Jerry wasn't so lazy!)

Jack Neworth is the author of "LaughingMatters," a humor column with the Santa Monica Daily Press for 13 years and has written numerous articles about Jerry 's age defying exploits.

Memoirs of a Navy Brat