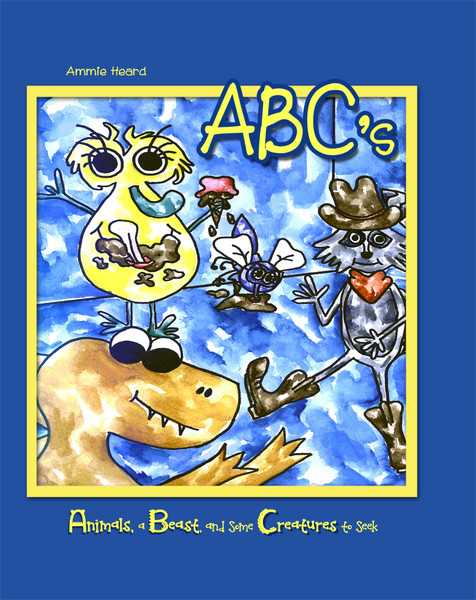 ABCs: Animals, a Beast, and Some Creatures to Seek
by Ammie Heard

ABCs: Animals, a Beast, and Some Creatures to Seek is a fun way for young children to learn the alphabet. Accompanied by beautiful color illustrations, children will enjoy reciting the alphabet in an exciting way!

Author Ammie Heard hopes that all young children will have the same reaction as her two-year-old son did when he watched her painting the illustrations. She hopes they look at the joyful, simple, and colorful illustrations and learn from them.

Ammie Heard lives in Kennewick, Washington. She has lived there pretty much her whole life. She is a stay-at-home mom. She is married to the man of her dreams for eleven years, and they have been together half of her life. They have a two-year-old son, Kohen, who is an amazing, charming, very rambunctious, fun-loving little boy, and they have an adorable four-pound, five-year-old little yorkie, Izzie Poo Poos, who is as feisty as they come.

It wasnt until high school that Ammie found the love of pottery. Her friend Laura told her to take the class because it was fun, so she did. She quickly realized she wasnt half bad, and she thoroughly enjoyed it. She found herself wanting to be at the potters wheel any chance she had. Her teacher, Ms. G, believed in her, and this encouraged her to become a better potter and make her want to do the best she could. She won the Best Artist award at her high school graduation, so she went to college to be an artist.

Ammie went on to community college and received her associates degree. She took a lot of pottery classes and other art classes, among the general classes. From there she went to Central Washington University and earned her bachelors in fine arts. Her area of concentration was pottery. It was a great learning experience. She also found enjoyment in watercolors, oils, and sculpture. She has entered her work in many art shows and has had a solo show. She has won awards and sold many of her pieces. Art has been a part of her life for as long as she can remember, and she loves being creative in everything she does.

Her recent experience of being a mother has inspired her to begin this new journey in creating simple, vibrant illustrations, and putting them in a book that children can learn from and be inspired to learn.

Seek, to Extol the Truth