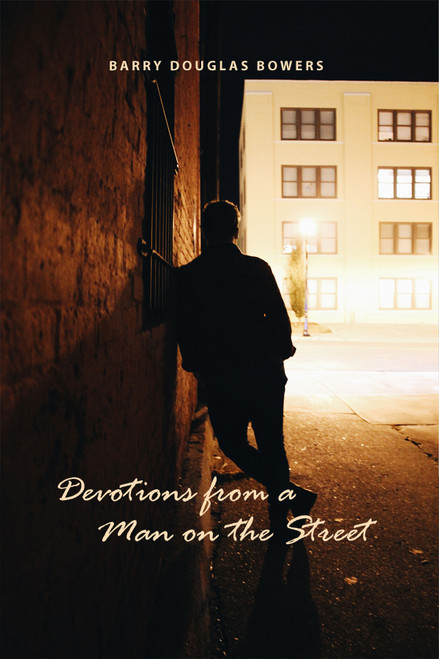 Barry Douglas Bowers was a man of great passion. His life lived and breathed the essence of both great victory and confidence, to one that was relatable to us all. Barry lived and breathed the love of our Abba Father, but he was also a man like all of us. He was broken, bruised, defeated, and ashamed. Despite all of this, his heart was full of love—love for his family who were both near and far, separated yet reconciled by love, love for his friends, his brothers, and a family that was a far greater blessing than human flesh could provide. His devotions are for all. They aren’t about religion or great theology but reminiscent of the greats of saints and their blessed revelations. No, Barry was, and is, incomprehensibly the “Man on the Street.” He was all of us. He was our victory and he was our sorrow. His heart for this book would be to reach the other men and women “on the street” of life, not those who are blessed and favored in this world.

Barry Douglas Bowers, beloved husband, father, and friend went to be with his Lord and Savior on May 29, 2013. He leaves his loving memories to be cherished by his amazing wife and best friend of twenty-nine years, Julia Bowers. They have six children and nine grandchildren together, and Barry has three brothers and one sister. His family was his life and they along with close friends recall the spontaneous words of life he often shared that served as a source of hope and stability. Barry Douglas Bower’s selfless and compassionate heart was experienced by all whose lives he touched.

Early on in his ministry, Barry Douglas Bowers worked with Promise Keepers to foster the development of strong husband and fathers. In the late nineties he was involved in coordinating a series of community-wide tent revivals called “It’s All About Jesus” to encourage unity among Christians in the triple cities. Shortly after, he was ordained as a pastor through the Free Methodist Church. In an effort to foster the “true” purpose of church and provide a place to worship freely, he began Public Square Ministries, and in 2009 he brought back “It’s All About Jesus”, a summer-long revival held at the Binghamton Plaza. Barry Douglas Bowers continued to minister to many up until his entrance to heaven, and his investment in God’s work will long be remembered by all those he encountered.

Determined To Love Him