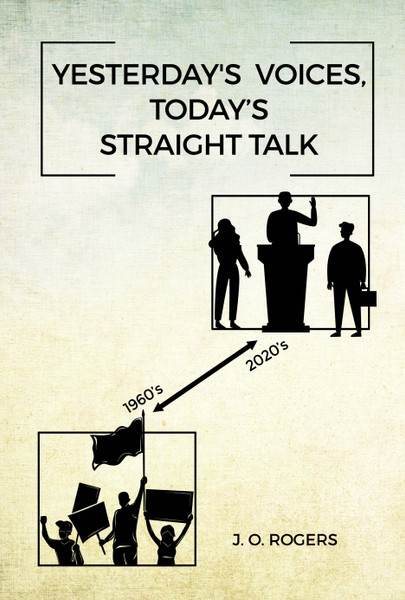 In 1965, J. O. Rogers published Blues and Ballads of a Black Yankee—a Journey with Sad Sam in Verse, for which Whitney M. Young Jr., then Executive Director of the National Urban League, wrote the Foreword. That book of poetry chronicled, in verse, the voice and feelings of some of the people he encountered during his volunteer work as spokesperson for NECAP, the North End Community Action Project. NECAP was the first and most active student and citizens’ civil rights organization in Hartford and Central Connecticut during the 1960s.

Yesterday’s Voices is the last of his unpublished poems from that era. The voices of the downtrodden, disenfranchised, and those denied opportunity can still be heard today in many places in the United States. And, as it was in the '60s, the protests are mostly peaceful and there remains a strong feeling of hope that the nation and the world have the will and desire for change.

Today’s Straight Talk is composed of verses written in the past several years about historical, political, social, past and current problems, attitudes, conditions and feelings. They are easy to read and clearly stated. The only way we can strengthen our democracy and participate in establishing those human values and virtues that are endangered is to be honest in expressing our thoughts and actions and to communicate with each other using simply stated "straight talk".

Born and raised in Connecticut, J. O. Rogers majored in political science and marketing at the University of Connecticut, after returning from service in Korea during the Korean War. His long career at Southern New England Telephone Company (SNET), the Bell system affiliate in Connecticut, included marketing positions and a two year loan assignment with AT&T in Washington DC. There he gained national recognition for directing the design and coordination of telecommunications services used by the Bureau of Census to complete the 1980 decennial census. It was the first use of widely published regional toll-free 800 numbers by the U.S. Government to provide access to citizens seeking answers to questions. In his last assignment prior to retiring, he was Division Manager for Government Relations, with responsibility for lobbying on state and federal issues affecting SNET and the telecommunications industry. After retiring from SNET, Rogers was President of Connecticut Retail Merchants Association (CRMA), where he guided the Association through an intense ethics investigation involving violations by a former president and the organization's lobbyist. He and his wife, Lorraine Kittredge Rogers moved to Maryland in 2016. They have two children, Sharon Elizabeth Rogers of Washington, DC and David Austin Rogers of Portland, OR.