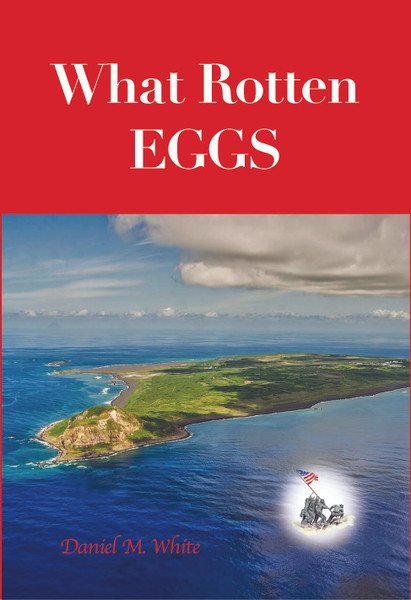 A work of fiction based on a true story. What Rotten Eggs follows a Coast Guard Lieutenant as he begins a tour as the new commanding officer on a military base. The base is on a small, desolate island, Iwo Jima, Japan.

While he wasn't sure quite what to expect on the island, Lieutenant Roy Fisher absolutely never could have predicted what happened. In his first week, a crew member went insane, another threatening to knife him in his sleep, he experiences a life-or-death decision with a sailor in shock, and then the doctor is seriously injured forcing him to act as the doctor. One crew member was so distraught he tried to sail 700 miles to Tokyo on a homemade raft. While dealing with all this, the new commanding officer realizes that someone on the base is working to make him fail. At first, he believes that his crew is a bunch of rotten eggs. As he gains experience and gets to know the men better, he realizes that isolation is the problem.

The story is interesting because it deals with the problems that arise from being isolated from friends and family and looks at ways of dealing with them. It also shows that confidence and creativity can go a long way to solving problems. With the isolation we all experienced lately with Covid-19, that theme seems a little closer to home.

Daniel M. White was born in 1938 in New York City. He graduated from the United States Coast Guard Academy in 1962. He served as the commanding officer of Loran Station Iwo Jima 1965-1966. After military service he spent thirty years in the high-tech industry. He worked for both IBM and Apple Computer. He is retired and lives in Chapel Hill, North Carolina. His hobbies include writing, traveling, golf, gardening, bridge, and amateur hypnosis. He is married and has three grown daughters, five grandchildren and one great grandchild. A second great grandchild is on the way.

"Excellent fiction book based on a true story. As a former LORAN station CE I can identify with many of the problems he had. Nicely laid out in shot chapters. An easy one day read. Brought back a lot of memories. A story that needed to be told. Recommend any former LORAN station personnel both officer & enlisted to read this book. Bravo Zulu, well done." - Neal Mahan

Should be read by all that served on loran

I served 22 years in the U.S. Coast Guard, one of those years was on a Loran Station on an island south of Sicily Italy, Lampedusa. We had 18 Coasties on the station.

Daniel’s book was a different time and place with different people but it was so similar to my year of experience that it transported me back to 1981/2. This well written book covered the good times, bad times and a whole lot of crazy that happens when you isolate people from family and friends for a year. All the different personalities that blend together, most of the time, to become a “crew”. After my year of Loran duty, I came away with a few lifelong friends and many memories. Thank you Daniel for this excellent book and bringing those memories to life. I recommend “What Rotten Eggs” to all Loranimals and anyone interested in rarely discussed life on U.S. Coast Guard Loran Stations.