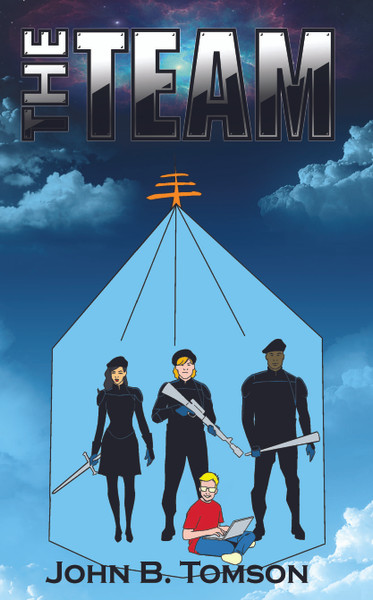 By: John B. Tomson

Heinrich and Greta Van Heisen – husband and wife scientists – along with their young son, Albert, are taken to an abandoned Russian military compound and forced to reverse engineer an alien spacecraft. When a daring attempt to escape goes awry, Greta gets left behind as a fleeing Heinrich makes a parting promise: “I will return for you, my love!”

It’s the first day of a new school year in King’s Glen, Virginia and there is a new science teacher in town. Heirich Van Heisen is secretly scouting for a few talented high school students to form — THE TEAM.

Armed with alien technology, sarcastic skater boy Chris Holiday, soldier wannabe and football star Todd Simons, and the beautiful ninja master Jennifer McCullough, train to become the most effective tactical team ever assembled. Engaging in epic battles, they take on Russian Mafia boss Vladamir Kolovsky and attempt to save the world from his horrifying K-Beam weapon.

With young Albert as mission support, and two loving mechanical birds named Molly and Polly providing intel and recon, can The Team complete their mission and rescue Greta, through secrets, drama, and blossoming love?

The author, John B. Tomson was born in Buffalo, New York in 1968. Tomson was raised on a small farm south of the city with two brothers and sisters. He attended the Griffith Institute School District in Springville where a beloved Drama and English teacher, Fred Gantz, encouraged and instilled in him a love for writing fiction.

After a successful career as a toolmaker machinist, John now lives in Avenal, California. The author has a daughter, Randi, who lives in New York. He has a son and grandson, Ian and Jaxson, who live in Tennessee.

Why Didn’t You Call? A Peace Corps Panama Exposé - HB

All of Me: Heart, Mind, Soul, and Family

When Ignorance and Savagery Prevailed