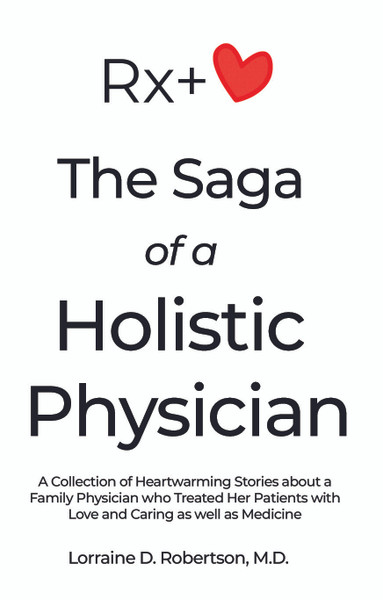 This book is a heartwarming collection of true stories detailing some of the most compelling experiences of a woman Family Physician. Dr. Robertson says she wrote it as her way of paying homage to this respectful and honorable career and to describe the unique relationship that many patients have with their Family Physician.

In her thirty-five years of practice, Dr. Robertson found that her holistic approach of giving not just medicine but also love, warmth, and caring to her patients and their families provided great benefits for both them and for herself. Some of her stories will move you to laughter, and some to tears, but Dr. Robertson hopes all will move you to experience the spirit of joy she experienced in service to those in need.

Also included in the book are a series of original paintings that were inspired by the loving relationship of an elderly couple in her practice. She has called this collection “Ain’t Love Grand” because Dr. Robertson has always believed that nothing in this world trumps love.

After a near-fatal illness at the age of twenty-one, Dr. Lorraine Robertson later decided to cross the existing barriers to women in medicine. And so, at the age of thirty-two, already married and a mother with two young sons, she applied to and was accepted to medical school and joined a Family Practice residency upon graduation. During her thirty-five years practicing as a Family Physician, Dr. Robertson cared for the patients of her practice and also donated her time to serve in a Free Clinic in a nearby community.

In addition to her commitment to her work, Dr. Robertson and her late husband enjoyed the hobby of ballroom dancing, and they competed six times in the National Championships. After her husband developed medical problems and competing became too strenuous for him, they segued into musical theater and danced in thirteen shows.

In retirement, Dr. Robertson resumed piano lessons and also took up painting. She has participated in numerous art shows and even has her paintings in several galleries. IIn 2017 Dr. Robertson was awarded the title of Ms. Florida, having won the Ms. Senior Florida Pageant. She then represented the senior women of the state of Florida in the Ms. Senior American Pageant in Atlantic City.

She has two sons and five grandchildren who are a source of great pleasure and happiness for her.

Conversations With Our Dog, Bella