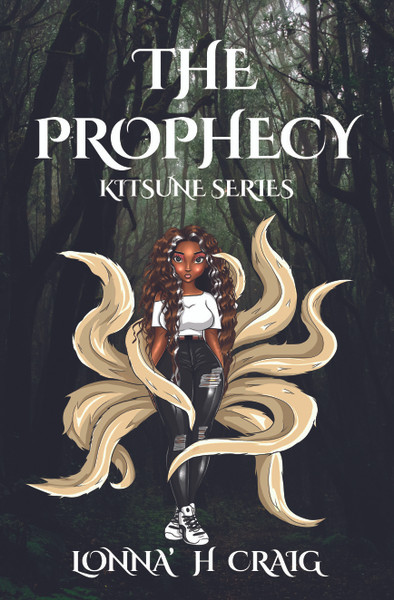 The Prophecy: Kitsune Series tells a fantasy story of Snow Lawson’s, a Celestial Kitsune fox, experiences with love, family issues, and becoming a Queen. Snow was adopted and grew up in a werewolf pack called Yellowstone Pack. Snow believed that she was a human girl and wanted to live a simple life until her twentieth birthday. Within the supernatural world, there is a prophecy of a Celestial Kitsune Fox who will become the Queen by defeating the Mad King Eliphas. King Eliphas is the leader of the council and supernatural being. The council consist of 11 members of the different supernatural species. Snow’s journey begins with finding her two mates (Alpha Azazel and Aaron), falling in love, learning about her new life as a fox shifter, finding her birth parents, and defeating King Eliphas. Alpha Azazel is a handsome, young, ruthless, and possessive Lycan who sweeps Snow off her feet. Snow’s second mate, Aaron is handsome, young, laidback, and nonchalant werewolf who is conflicted with his wolf to accept Snow as their mate.

This fiction novel will appeal to readers who are interested in the supernatural world of werewolves, dragons, vampires, enchanters, demons, angels, and other supernatural shifters. The Prophecy: Kitsune Series contains many elements that are irresistible to readers such as romance, love, sex, werewolves, vampires, marriage, action, and suspensions.

Lonna’ H Craig was born and raised in the city of Philadelphia, PA. She lives with her husband, three children, grandson, and four cats. Growing up, she was fascinated with vampires, werewolves, and other supernatural beings. Writing a novel was always on her bucket list, and eventually, with The Prophecy; Kitsune Series, it became a reality. When not absorbed in the latest gripping page-turner, Lonna’ loves cooking, DIY projects, spending time with her cats, family, friends, and helping other people in her community. Before she started writing fantasy novels, she received her master’s degree in Marriage and Family Therapy from Capella University. The Prophecy: Kitsune Series tells a fantasy story of a Celestial Kitsune fox who finds her mates, love, parents, and becoming a Queen. This is only the stepping-stone for Mrs. Craig who plans on continuing her writings with other fantasy novels.

“What we do in life echoes in Eternity”