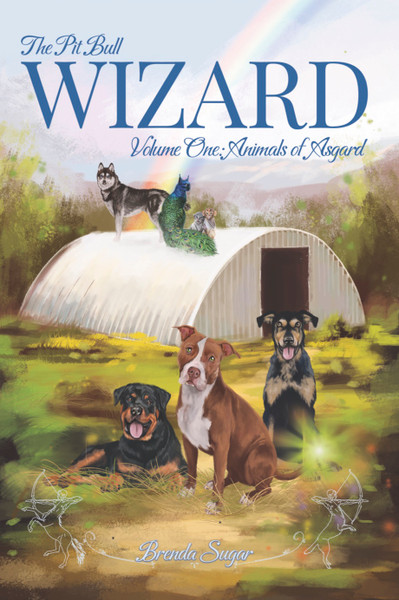 Volume One: Animals of Asgard

Merlin is an adopted Pit Bull that discovers he has magical powers. He enrolls in a secret training school for animal wizards in hopes of using his newfound powers to find his missing Pit Bull family. In the school for magical animals, Merlin makes new friends and enemies. He takes a variety of classes – from telekinesis to human relations – and is challenged to become part of the Celestial Animalympics team. During his journey, he and his two best canine friends uncover the many human-created evils that animals are forced to endure, leading to a climactic confrontation with the Pit Bull-hating humans who have captured Merlin’s brother that ultimately leads to a clue to his mother.

After thirty years in the medical field, Brenda Sugar decided to do something different and pursued writing. She wrote her first book in 2016 and it was published by Page Publishing. She is the proud guardian of Merlin, the Pit Bull that inspired this story. She is an animal lover and rescuer, especially of the bully breeds. She strongly believes in adopting, NOT shopping for her four-legged family members. These include a barn cat, horses, and at one time, cattle. Merlin’s two best friends in the book are also real animals that live at the Sugar Ranch, where every day is a magical adventure. Merlin and his two best friends are big fans of “Pit Bulls and Parolees.”

Curse of the Wizard - eBook

Curse of the Wizard

The Other Side of the Bridge