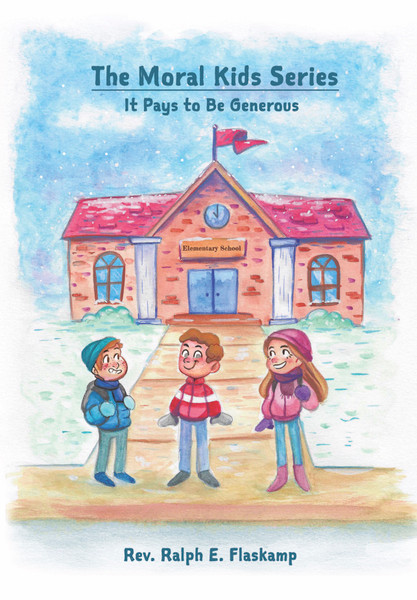 The Moral Kids Series: It Pays to be Generous

without them realizing that they are being taught. The teaching comes from a fictitious family

of kids know as the “Moral Kids.” The Moral Kids live in the town of Moralville,

named after their great-great-grandfather, who settled Moralville, and the children attend

Moralville Elementary School. The children live on a 100-acre parcel of land with their mother

and father just outside of town. The setting is the rolling hills of today’s New England.

The names of the Moral Kids are: Jace, Annaliese, Kenny, Piper Kate (Cousin),

and Abby (Cousin). Each story stars one or all of the children at a time.

The intent of the book is to teach children through the life experiences of the Moral Kids.

Each story addresses one moral for living a good life. It seems that in these present times

that good morals are no longer taught in schools or in the family units. The inspiration for

my writing comes from observing the lives and conduct of my great-grandchildren.

by learning and applying good morals in their lives.

has learned many things that he enjoys sharing with others. Flaskamp comes from a family

of six, which included three brothers. He was born and grew up in Cumberland, Maryland

in the beautiful Appalachian Mountains. His fondness for hunting, fishing, and the love

for the outdoors finds its roots in that beautiful location. He had the privilege of marrying

wonderful wife, Frances, for the past fifty years. He retired from the United States Army

and energy on becoming a minister. He retired from the pastorate in 2018 after eighteen years

of pastoral service. Though retired, he still serves in the ministry. He has stayed busy through

his hobbies as a metalsmith, painter, and writer. He also enjoys metal detecting. He has been

blessed with a large family and enjoys spending time with them. His close involvement with

and the unchurched not only in this country but throughout the world.

He believes we must reach the children.

The Moral Kids Series: It Pays to Be Generous - eBook

Adventures at the Farm: Book 1

Hank and Howey Go on an Adventure

Come Along With Me