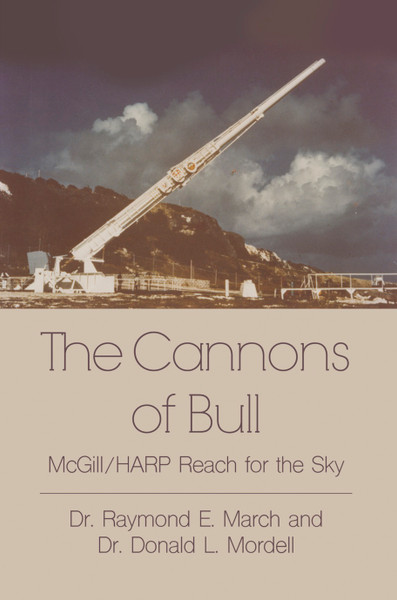 McGill/HARP Reach for the Sky

The Cannons of Bull recounts in a fascinating, insider fashion the remarkable story of the McGill High-Altitude Research Project. Also known as HARP. An exciting endeavor to use cannon instead of rockets to launch vehicles into space. Unique, comprehensive and authoritative.

Dr. Raymond E. March was born in Newcastle upon Tyne, England, and he later became an assistant professor at the newly instituted Trent University in Peterborough, Ontario. He retired as Professor Emeritus. As a child March experienced the ordeal of World War II in Britain. He served an apprenticeship with the shipbuilders-formed Research Station, PAMETRADA (Parsons and Marine Engineering Turbine Research and Development Association) and afterwards studied chemistry at the University of Leeds. After graduation in 1957, he completed a doctoral program at the University of Toronto on a scholarship. Initially, Dr. March worked at Johnson & Johnson in Montreal: then took a postdoc position at McGill University, where he did impact work for Gerald Bull, who built the supergun.

Dr. Donald L. Mordell was born in Cambridge, England, and he later became Dean of the Engineering Faculty at McGill University. He was studying engineering at Cambridge when World War II broke out. He immediately joined the Royal Navy but, after 1 week, was released because he used glasses; he returned to his studies. He received a Master degree at Cambridge, then took a position with Rolls Royce working on gas turbines and jet engines. He arrived in Canada in 1947 and took up a position as Assistant Professor at McGill University. A decade later, he was appointed Dean of the Engineering Faculty at McGill, and hired Gerald Bull as an Associate Professor. Bull was the Research Director of the High-Altitude Research Program, HARP; Mordell, as Administrative Director, kept safe and bequeathed his HARP correspondence. Alas, he died in 1988.

The Cannons of Bull - eBook

The Wave of Life

The Way of the Dog