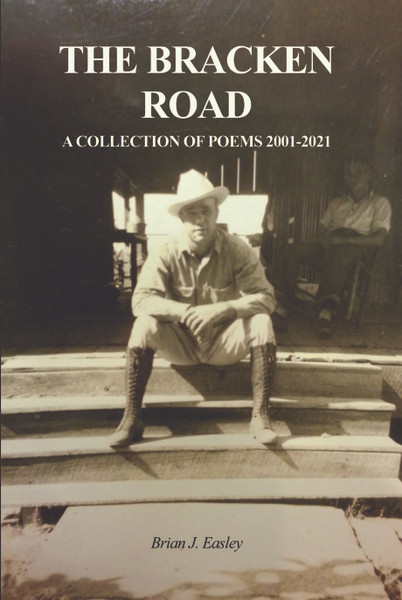 From the deserts of Iraq to the plains of Kansas, the streets of Chicago, and the coffee shops of Washington, D.C., The Bracken Road: A Collection of Poems 2001-2021 offers a glimpse into the mind of a combat-disabled veteran just trying to navigate a contemporary American life.

Brian J. Easley was born in San Antonio, Texas, and raised in nearby Bracken, for which this book is named. He is the Vice President of a small company called Druther’s located in Louisville, Kentucky.

A combat-disabled veteran of the Iraq War, Easley served as an infantryman from2001 to 2004 and 2010 to 2013, later receiving an honorable discharge as a staff sergeant. He is a member of the Board of Directors of the World Affairs Council of Kentucky and Southern Indiana and sits on the Kentucky Advisory Committee of the U.S. Global Leadership Coalition. Easley is the producer of The Man with the Big Hat, a documentary film about the life and works of Steven Fromholz: a singer-songwriter, actor, river guide, activist, and Texas Poet Laureate. Brian is also the singer for a Washington D.C. area band called Exit Vehicles. Easley holds a bachelor’s degree in Political Science from DePaul University in Chicago, Illinois; a master’s degree in International Security Studies fromTrinity Washington University in Washington, D.C.; and a Master of Business Administration degree from the University of Louisville, in Louisville, Kentucky. Easley lives in Harrods Creek, Kentucky, with his wife Catherine and their children Robert, William, and Emily.

Leaves of Autumn: A Collection of Poems