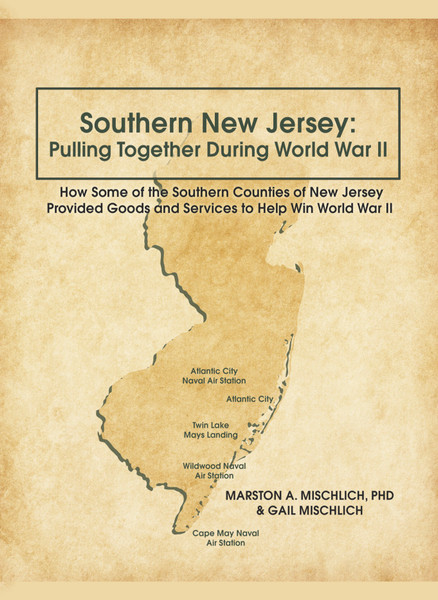 by Marston A. Mischlich

Southern New Jersey: Pulling Together During World War II shed some light on the efforts of average people from all walks of life in some of New Jersey’s southern communities who provided goods and services in a united effort to help win World War II. Some were unable to serve in the armed forces but still felt the need to do their part. Much of the material is little known to the current generation. For example, men and women involved with the “Bomb Plant” located just outside Mays Landing, New Jersey, were told not to divulge any information as to how the bomb was assembled. It was so secret that few have ever talked about it seventy + years later. Personal interview with folks who were there and declassified government reports have helped to paint a better picture of how people worked together for a common cause. Very little has been written about this part of New Jersey and still more needs to be  done. It offers the reader a better understanding of the sacrifices ordinary people made to achieve a common goal and at the same time learn about their effort to be remembered and celebrated.

Marston A. Mischlich is a member of the following local historical societies: Army Air Force Museum at Millville, New Jersey and Mullica in the Pines historical society in Nesco, New Jersey. He has lectured at local schools about his book and its impact on the local history. His interests include continuing research of local history and little-known facts about it. His great-grandfather served in the Union Army of the United States Civil War and his grandfather was in the United States Navy Reserve during World War I. Dr. Mischlich served in the United States Marine Corps and the 177th Air National Guard Wing at Pomona, New Jersey. He holds various degrees in his educational field and earned an associate’s degree in Nuclear Technical Devices from the Community College of the Air Force in 1983; an associate in arts degree from Atlantic Community College in 1986; a bachelor of arts degree Glassboro State College in 1994; a master of arts in humanities degree from California State University at Dominguez Hills in 1998; and a doctorate of philosophy in Social Science Degree in 2003. He is a retired adjunct professor of history and geography at Atlantic Cape Community College. A former member of EOD (Explosive Ordnance Disposal) team with the 177th Air Guard Unit at Pomona, New Jersey. A twenty-year member of the International Association of Bomb Technicians and Investigators (IABTI). He belongs to the American Legion Post 158 in Egg Harbor City, New Jersey and the Wildwood Naval Air Station Foundation in Rio Grande, New Jersey.