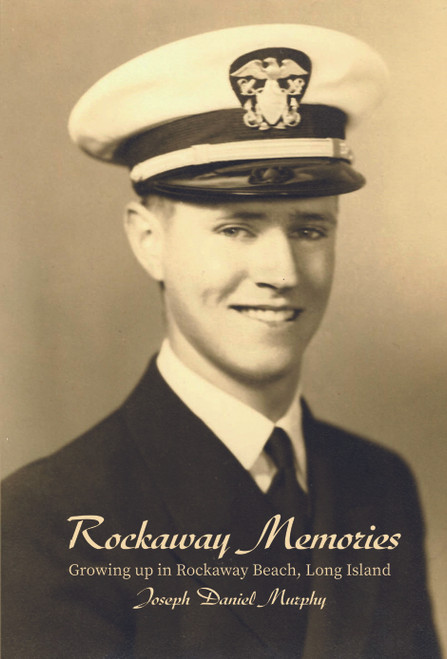 A national treasure of family life on Rockaway Beach, Long Island in the 1920’s – 1930’s through WWII. A captivating story written by Joseph Daniel Murphy, a WWII naval officer. Life lessons about family, compassion, faith, determination, and survival—from a member of the “Greatest Generation”.

A deeply personal story of one young man growing up in the early 1920’s and 1930’s in the Belle Harbor section of Rockaway Beach, Long Island. Life was dramatically different than the hustle and bustle of families living in New York City which was just thirty miles away. In the remote location of the Long Island Peninsula and Belle Harbor, very few families had automobiles and public transportation was a long and time-consuming process. As a result, people didn’t leave their small neighborhoods or their Atlantic Ocean playground very often. Everyone watched out for one another and took care of each other.

Growing up in Rockaway in the 1920’s-1930’s provides the framework of what helped shape and build the gentlemen and officer Joseph would become. It is a self-written memoir of essential life lessons of family, community, service, and survival during a period of history that challenged America’s grit and produced the “Greatest Generation”. The ‘Great Depression’ was an economic challenge to every American. President Franklin D. Roosevelt’s New Deal helped rebuild America, and his ‘Fireside Chats’ calmed everyone’s fears and gave the American people a reason to believe that life would become better with new opportunity. A resident of Long Island, and one of three boys, Joe fondly recalls his life and the best of times growing up in Belle Harbor. This is a story of hardship and hope.

On December 7, 1941, Japan launched a devastating surprise attack from the air and the sea on Pearl Harbor and initiated WWII. This event challenged every American to his very core. It was to become a time of service and sacrifice, with every American doing their part to support the war effort from home and abroad. Joseph D. Murphy at age twenty, served as one of the youngest commissioned Naval Officers aboard the aircraft carrier USS Intrepid in the United States Pacific Fleet during WWII. The USS INTREPID was the flagship of Task Group 38.2 led by Admiral William (Bull) Halsey. This treasured memoir is of Joe’s pre-war childhood on Rockaway Beach, Long Island through the end of WWII.

Joseph Murphy resides with his wife Reva and daughter Codi in Northern California.

The Michelangelo Project: The Creation of Mac Adams