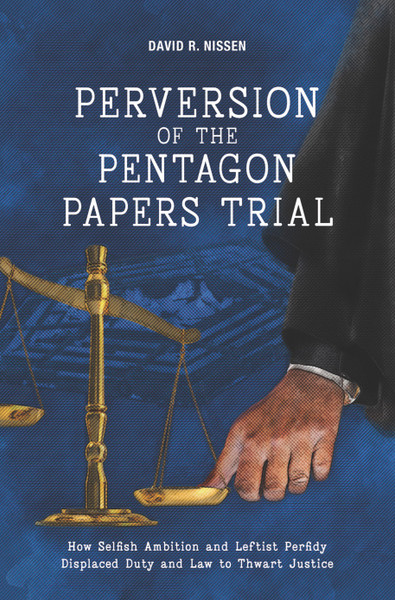 For the first time, former federal prosecutor, David Nissen, reveals the true story behind the Pentagon Paper Trial. A United States District Court judge, obsessed with obtaining higher public office was assigned to preside over the criminal trial. The judge was convinced that any conviction of the defendants would be overturned on appeal and would leave a mark on his record that could disqualify him for a higher position. To avoid this, he decided to prevent the jury from returning a guilty verdict and disclosed his plan to some of his confidants.

Perversion of the Pentagon Papers Trial recounts the political backdrop against which the original crimes were committed then takes readers into the courtroom for a virtual front row seat throughout the trial. It chronicles the judge’s capitulation to the defendants’ demands, discloses the fictitious defenses he fabricated and his collaboration with the defense to place the government on trial by groundless “investigations”. By bringing the facts to light, Nissen reveals the court’s sabotage of the trial and exposes the injustice done in this notable court case.

David R. Nissen received his BA from Wheaton College, MS from the University of Illinois and JD from the University of Illinois College of Law, where he graduated with highest honors. He was elected to membership in the Order of the Coif, and elected associate editor of the Illinois Law Forum, and treasurer of the school’s student body, and was a finalist in the law school’s moot court competition argued before the Illinois Supreme Court.

Nissen served in the US Army as a counterintelligence agent at the end of the Korean War. He went on to serve as Assistant US Attorney in Los Angeles, where he became Chief of the Organized Crime and Racketeering Section, and subsequently Chief of the Criminal Division. In 1971, Nissen was appointed chief prosecutor in the Pentagon Papers criminal case, and after, returned to private law practice until his retirement. David was married to Celia, his wife, for sixty-six years, and together they had three children, four grandchildren and two great-grandchildren. Until his passing in December 2020, he was a self-described mediocre but avid tennis player.

The Tale of the White Cardinal

Where Did Ellie Go?

Raised by a Narcissist - HB