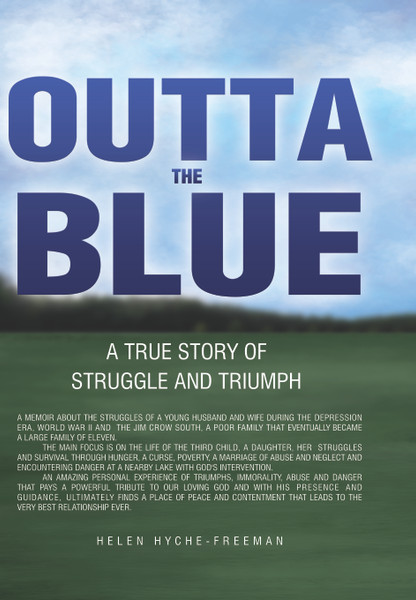 A Memoir about the struggles of a young husband and wife during the Depression Era, World War II and the Jim Crow South, a poor family that eventually became a large family of eleven. The main focus is on the life of the third child, a daughter, her struggles and survival through hunger, a curse, and poverty, a marriage of abuse and neglect and encountering danger at a nearby lake with God's intervention.

An amazing personal experience of triumphs, immorality, abuse and danger that pays a powerful tribute to our loving God and with His presence and guidance, ultimately finds a place of peace and contentment that leads to the very best relationship ever.

Helen Hyche-Freeman was born April 8, 1949 in Samantha, Alabama to her parents Hezekiah Hyche and Louise Palmer-Hyche. She is the third child of nine siblings, five brothers and four sisters, including herself. After earning her Bachelor of Arts Degree at Stillman College, in Elementary Education, May 1972, her teaching career also started that same year at Westwood Elementary School in Coker, Alabama. A year later at age 23, she married Arlington L. Freeman, age 38, the only man she ever dated prior to getting married. That marriage lasted seventeen years. They had three children together, one son and two daughters. The marriage ended in divorce in 1991. Unfortunately, a few years later he passed away from a type of onset diabetes. Ms. Hyche-Freeman went back to school after her divorce and earned her Master's Degree in Elementary/Early Childhood Education at Livingston University, a two year college, now known as the University of West Alabama, a four year college.

Helen has dated other men of interest but has never remarried and is content in her life with her relationship with God and His blessings.

Bird-watching is a favorite pastime, watching various species come to the bird-feeder in the Mimosa Tree in her backyard.

As Helen matures, she enjoys peace and quiet times, which are a treasured blessing.

Outta The Blue is her first book. It has been a labor of love and has been very therapeutic!