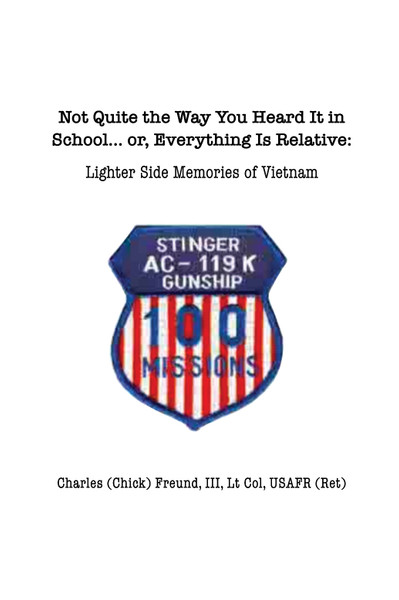 This memoir of Lt. Col. Charles Freund, III, USAFR (Ret) is an insightful, entertaining account of his early military life, focusing on the Vietnam conflict. Unlike most other stories readers have heard, his experience in Southeast Asia was mostly enjoyable. Written in a conversational style and filled with humor, readers will be entertained while reading a wartime memoir with stories ranging from his exploits flying gunships over Laos and South Vietnam to anecdotes of dust bunnies and tennis bugs. Freund’s memorable memoir is sure to entertain readers as they discover a lighter side of a tumultuous time of US history.

Lt. Col. Charles Freund, III, USAFR (Ret) was born and raised in Georgia until he moved to Cincinnati when he was sixteen. After graduating from Miami University (Ohio), where he met his wife Andrea during his freshman year, he joined the air force. His assignment locations included Texas, Florida, California, Thailand, and Vietnam, during which time he flew gunships over Vietnam and Laos.

He is retired and enjoys a number of hobbies, including racquetball, golf, billiards, wine, church activities, reading and writing, and cutting and splitting firewood. He was one of the first members of his church’s Writers Support Group. It was at the first meeting that other members encouraged him to write a book. He is also the president of the choir and a founding member of the church wine tasting groups. He and his wife live in Marietta, Georgia and have two children and two bright, marvelous grandchildren.

You Heard It Hear: Humorous and Heartwarming Quips from Head Start to High School - eBook

Not Quite the Way You Heard It in School... or, Everything Is Relative - eBook

Family: It's All Relative