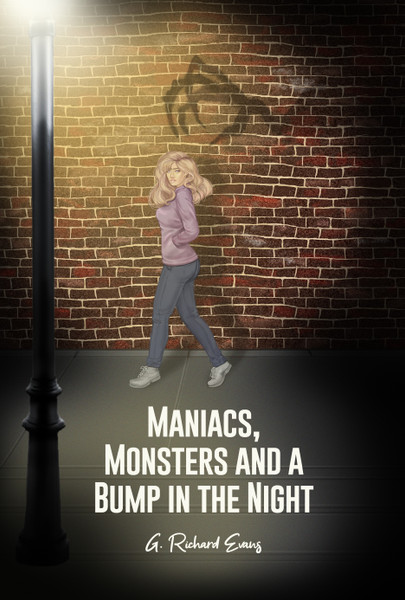 The stories in Maniacs, Monsters and a Bump in the Night run the gamut from the horrible things that can come from revenge, to the wonderful things that can come from sacrifice, and suffering. There is darkness, and horror, with a bit of fantasy and science fiction as well. These stories reveal how poor decision making, treating people with contempt, or the abuse, and punishment of a child can have serious, even deadly, consequences. The reader will understand after finishing this book how important it is to treat people with respect and dignity.

G. Richard Evans worked in the substance abuse and addiction field for a quarter of a century, from Detox Technician to Program Director, while at the same time, teaching in the Addiction Studies program at a local Community College. Even in retirement, Evans still does what he can to help people get and stay sober. Evans writes songs and some poetry, enjoys a good movie or play, and watching his local sports teams in action. He is a widower, but finds himself fortunate to have three children and two grandchildren living close to him, allowing for plenty of quality time spent together. He has been a fan of horror for as long as he can remember and has an extensive collection of books from such authors as Stephen King, Robert McCammon and Dean Koontz. Three of the stories featured in this book were previously published in the 1980’s.

Review of Maniacs, Monsters and a Bump in the Night

[Following is an official OnlineBookClub.org review of "Maniacs, Monsters and a Bump in the Night" by G. Richard Evans.]

What are you afraid of? Debt? Rejection? Bullies? Humiliation? G. Richard Evans in Maniacs, Monsters, and a Bump in the Night takes our deepest fears and turns them up to eleven into fifteen terrifying short stories that go from novellas to ones that comprise only a few pages. All of them have a fantastic or supernatural element, with some leaning heavier into the paranormal and others much more into realism. My favorite one, titled “Scream It’s Dark” deals with one of humanity’s most primal fears: darkness. But why is Peter scared of the dark? And why, if he has this phobia, does he prowl poorly lit nightclubs looking for women?

The stories are relatable, which makes them even scarier. Of course, most of us won’t find a demon or a ghost in our lifetimes, but the core themes, such as envy, superstition, or addiction, are common to the human experience. Maniacs, Monsters, and a Bump in the Night has something for everyone. Paranormal enthusiasts will find their fair share of witchcraft, demons, and ghosts, while pragmatic readers can see characters who struggle with more realistic fears, such as humiliation. However, try to keep an open mind. I usually prefer supernatural horror. So I wasn’t especially enthused about the story, “Ask Your Daughter”, which is about a junkie. I’ve never even tried drugs in my life. But the talented and sinister pen of Mr. Evans put me through such an inferno of aches and chills that I had to take a break from reading.

The author planned every word in this book to achieve its maximum effect. He doesn’t fatten up his stories with unnecessary gore for shock value but uses each word carefully to create unforgettable moments of fear. Take, for instance, the following brief but powerful description: “It was both indescribably beautiful and unbelievably ugly.” The amazing narrative abilities of the author make even the most innocent of themes a frightening one. We’ve all had a cough, right? After you read “You Bet Your Wife” you might never again look at a cough as a simple, annoying malady. This story is also a great example of how even the titles are creative and work as an appetizer for what comes next. Every narrative aspect of these tales is perfectly executed, but the endings were my favorite part because they surprised me every time, with one story (I won’t tell which, as not to spoil the fun) even having a relatively happy ending.

Finally, I enjoyed that G. Richard Evans doesn’t limit to a glum narrative tone, but includes hints of humor and even some thought-provoking passages. Take, for instance, the following reflection: “He knew that things aren’t always as we think they are and that he had been buried in his own conception of life for much too long.” (p. 25).

The only drawback to this delectable read is that the book has over ten minor editing mistakes. I would like nothing more than to give it a perfect rating, but these flaws prevent me from doing so. I rate Maniacs, Monsters, and a Bump in the Night by G. Richard Evans 3 out of 4 stars because of its original plots, relatable core themes, powerful descriptions, and flawless pacing.

This book is best suited for a mature audience since the author broaches many sensitive subjects, such as alcoholism, child abuse, and animal cruelty. I recommend this book to readers who like fantasy, the paranormal, and horror. It’s also a great read for those of us who occasionally don’t have the time to tackle a full-sized novel but still want a chunk of literary reverie in our days. Readers who look for gothic horror will find these tales too focused on action and not enough in the atmosphere. This is not a book for people whose religious affiliation or personal beliefs compel them to take witchcraft and other paranormal topics as genuine threats. Likewise, I wouldn’t recommend it to readers who enjoy complex character development, because the length of the stories doesn’t allow for such luxury.

Maniacs, Monsters, and a Bump in the Night - eBook